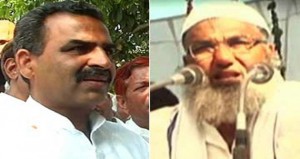 MUZAFFARNAGAR: Kadir Rana, BSP candidate and sitting MP from Muzaffarnagar, has finally had to make an appearance before the public. Muzaffarnagar votes in the general election next week.At a ground in Khatauli, before a thin crowd, Mr Rana lists his achievements over the past five years. His last public appearance was on August 30 last year, when he made a speech at a public meeting in Muzaffarnagar town a week before riots exploded.
As his constituency burned, and with the police on the lookout for him, Mr Rana went underground for almost four months. He was arrested in December on charges of inciting violence and released immediately.
Instead of penalising him, his party, Mayawati’s BSP, has fielded him again from Muzaffarnagar. This reporter’s repeated attempts to ask him about the charges he faces, were met with stony silence. Mr Rana even refused to talk about his campaign, merely shaking his head and was finally led away by his supporters.
On the other side of the polarised axis of riot politics is Mr Rana’s main rival, the BJP’s Sanjeev Baliyan, a Jat leader, charged with attending a massive meeting of Jats, called a mahapanchayat, where incendiary speeches were made in the run up to the September riots.
The BJP claims it does not want to bring up the riots in its campaign. But by Mr Baliyan’s side is another riot accused, BJP MLA Sangeet Som, charged with circulating a fake video on social media that fueled tension before the riots. A portion of Mr Som’s assembly seat falls in the Muzaffarnagar constituency that Mr Baliyan is contesting.Mr Som, who is a prominent Rajput leader from the region, told a small village gathering that he has assured Mr Baliyan of a lakh votes.
Both Mr Baliyan and Mr Som told NDTV that the charges against them are false, and they are being framed by the Samajwadi Party government in Uttar Pradesh.
But Mr Baliyan also has by his side Ravinder Singh, the father of Gaurav, a young Jat boy whose murder, and that of his cousin Sachin, set off Muzaffarnagar’s cycle of violence. Sachin and Gaurav were killed by a Muslim mob after they stabbed a Muslim youth, Shahnawaz, to death in the village of Kawwal.Ravinder Singh told media that he is backing the BJP because the party is standing up for the rights of Hindus.
There is hard politics behind the decisions of both the BSP and the BJP to field “riot tainted” candidates. Mr Rana is counting on the politics of fear ensuring that Muzaffarnagar’s Muslims, who make up 40% of the constituency, will overlook his absence at their time of need and vote for him, as they have in the past.
Similarly, the BJP has clearly fielded Mr Baliyan to try and consolidate the Hindu vote.
For the parties it is about short-term political gain. But for Muzaffarnagar, it will mean keeping old wounds open.