KHALILABAD (UP) in an election that stands out for hate speeches, name calling and unambiguous attempts by political parties to polarise voters, comes another controversial comment from the Samajwadi Party’s Abu Azmi. Mr Azmi said at an election rally in Khalilabad, Uttar Pradesh, “If any Muslim opposes the Samajwadi Party, have a DNA test done, he could be an RSS man. Muslims who don’t vote for the SP are not true Muslims.” 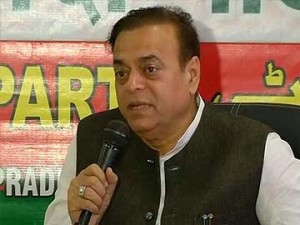 The Congress’s Rashid Alvi has shot back, “I cannot say if the Samajwadi Party is trying to conduct DNA tests of those people from riot camps who have voted against their party. Hope Abu Azmi does not test the DNA of Muslims who were killed in Muzaffarnagar or those in relief camps.”The Congress and other political parties have accused the Samajwadi Party, which governs Uttar Pradesh, of failing to check the communal violence that tore through Muzaffarnagar last year, killing 60 people, and of mishandling the massive humanitarian crisis that followed as thousands of people fled their riot-hit villages and crowded ill-equipped relief camps.
At stake in Uttar Pradesh are 80 Lok Sabha seats. In the last general election Mulayam Singh Yadav’s Samjawadi Party, the Congress and the Bahujan Samaj Party got almost an equal number of seats, leaving only 10 for the BJP.
This year the BJP, led by prime ministerial candidate Narendra Modi, has strategically aimed at winning a rich haul in UP as a crucial part of its attempt to emerge the winner in these elections. This has meant a big scramble for the other parties to retain and consolidate their vote-banks in the state. Both the SP and the Congress have aggressively wooed the substantial 18 per cent Muslim voters in UP.
Senior SP leader and UP minister Azam Khan was banned recently from campaigning in the state by the Election Commission for making provocative statements at election rallies. It had also banned BJP leader Amit Shah, but later revoked it.

Mr Azmi is not new to controversy. He earned widespread opprobrium a few weeks ago, when he was quoted as saying that rape victims should be punished. He later denied making such a remark.