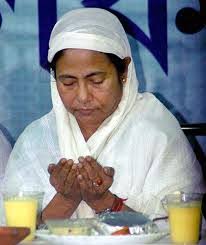 Kolkata: Any one should remember when Rajinder Sachar’s report on status of Muslims in the country, especially West Bengal which fetched Left Front Government bitter criticism from (other than Congress) in Parliament.

Though no Governments, including UPA, did n’t pay any heed to Sachar’s suggestion that since only 4 percent minority parents send their kids to madarsa so bring them under common education centre.

But a political threat comes back again for Mamata Banerjee. A report Living Reality of Muslim in West Bengal, released by Professor Amartya Sen’s Pritichi and fetched no good news for West Bengal Chief Minister Mamata Banerjee who tried to prove she really delivered socioeconomic goods to Muslims who have been treated as vote-bank in Bengal since the time of Nehru, and Mamata isn’t different.

But all said and done this has been an election year, who will share the minority vote-back in West Bengal. While this remains the political side-effect for TMC, “it would bite all major political parties in Bengal who ignored their actual welfare education and economic health,’’ said a sociologist..

The report said Muslims percentage in Government jobs are dipping as low as it used to be. “Left Mamata find an answer to these quest ions especially in an Election Year.

“Since illiteracy has also picked up a new phase during Mamata’s regime, even Siddiqualla, a Jamat Ulema Hind may have already lost face as he takes rounds with CM in rallies for Muslims,’’ the sociologist said.