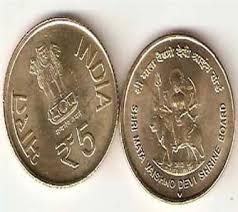 NEW DELHI : Several Muslim clerics have raised objections to new Rs 5 and Rs 10 coins issued by Reserve Bank of India (RBI) bearing inscriptions of Mata Vaishno Devi to commemorate the silver jubilee of the shrine board. They have demanded that the RBI recall these coins in the best interest of secularis
Mufti Mohammed Mukarram Ahmad Jah, the imam of Delhi’s Fatehpuri mosque said: “One should avoid using these coins. We are hurt.
“Today, it’s just coins, tomorrow it can be anything. People can use this as an issue and stoke trouble. In the interest of the nation, circulation of these coins should stop and all such coins recalled.”
The clerics have said it hurts religious sentiments and goes against the canons of secularism. If an Indian coin can have the image of a Hindu goddess, it can also bear a star with crescent moon, the symbol of Islam.