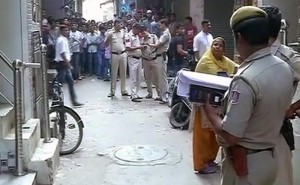 EW DELHI: A woman and her two children were found dead this morning at their house in west Delhi. The police suspect they were murdered.
The bodies of Shabnam, 28, her seven-year-old son Imran and six-year-old daughter Khushi were found by her husband Zaffar when he entered their second-story apartment in Raghubir Nagar.

Zaffar had reportedly gone to Jaipur for work on Saturday and returned today.There was blood on Shabnam’s face and on her neck, there was a wound apparently inflicted by a sharp weapon.
The couple’s three other children, all younger, were reportedly sleeping and unhurt, say the police.