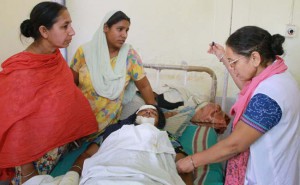 MOGA (Punjab) : A day before Moga shuts down in protest against the death of a teenager, who was molested and then shoved off a running bus last week, the family has agreed to cremate the body.

They have also accepted Rs. 30 lakh in compensation – the cash was handed over on the spot — and a government job for the girl’s father, who works as a Class 4 employee at a private firm.
For four days since she died, the girl’s body has been the centrepoint of the protests in Moga. The case had rapidly become a political controversy, given that Chief Minister Parkash Singh Badal’s family holds stakes in Orbit Aviation, the company that owns the bus.

The girl’s family had demanded a police case against Deputy Chief Minister Sukhbir Singh Badal. Earlier, they had also claimed that the police was pressuring them to come to an agreement with the four accused arrested in the case.
But today, after hectic negotiations with senior police and administration officials, the girl’s father said, “No one had threatened me…  Will go ahead with cremation, return my daughter’s body to me.” The body was in Faridkot Medical College for the postmortem examination.
Police officers said today’s mediation will not affect the case, which will take its own course.But it appears to have compromised the position of the Congress-led opposition, which had been demanding the resignation of the Chief Minister and his daughter-in-law and Union minister Harsimrat Kaur Badal, and a judicial inquiry into the case.
“This is nothing but equal to ‘blood money’… this sort of unethical compromise will further promote crime as the rich and powerful like the Badals, will very conveniently purchase a compromise after committing heinous crimes like the Moga bus murder case,” Congress spokesperson Sukhpal Khaira said in a statement.
“The family has been pressured for compromise. It is tax payer’s money which has been used to pay the family. The Badals should have paid it from their own pocket,” said Bhagwant Mann, Aam Aadmi Party Parliamentarian from Sangrur.