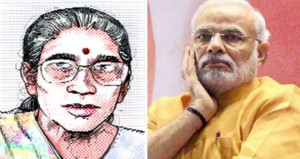 NEW DELHI : Bharatiya Janata Party’s prime ministerial candidate Narendra Modi’s wife Jashodaben, who was rumoured to be on a ‘char dham’ pilgrimage after the Gujarat Chief Minister accepted for the first time that he is married, is actually staying in yoga guru Baba Ramdev’s ashram.
A report in a magazine has claimed that Jashodaben is being kept in one of the ashrams of Ramdev near the Neelkanth Mahadev temple in Rishikesh in Uttarakhand until the elections are over.

The magazine has cited sources in the Vishva Hindu Parishad as saying that “soon after Modi acknowledged Jashodaben as his wife, Hindu activists and security professionals dressed as pilgrims arrived on her doorsteps in three white SUVs. They told her that her long-standing wish for a char dham yatra had come true. Sources said the group took her to Ahmedabad, where she boarded a chartered flight to Aurangabad near the Uttar Pradesh-Uttarakhand border, and then to Ramdev’s isolated mountain-top ashram at Rishikesh. Labourers in the ashram say a lady was seen arriving in a white vehicle on April 13.”
“Jashodaben is protected by top-level security people with ties with the Gujarat security services. Perhaps, she does not even know that those with her are not pilgrims but people tasked with keeping her away from the public eye,” the magazine further quoted a source close to Swami Swaroopanand Saraswati, the Shankaracharya of Dwarka Peeth, as saying.
Jashodaben has been drawn in the political slugfest by Modi’s rivals to target him.Jashodaben’s brother Kamlesh had revealed earlier this month that the reclusive 62-year-old retired school teacher has vowed not to eat rice and remain bare-footed till she sees her husband become the Prime Minister.