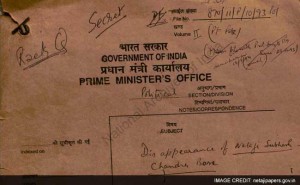 NEW DELHI: Imagine a government office sifting through several thousand files in 15 days and weeding out 10,000 useless ones. With instructions coming straight from Prime Minister Narendra Modi a fortnight ago, that’s exactly what his office or PMO achieved.

Officials spent hours each day going through thousands of files stacked inside the country’s top offices. And at the end of the exercise, the PMO discarded over 10,000 files, and also managed to transfer 1,000 files of important archival value, to the National Archives of India.
Since May 2014 – when Mr Modi took over as Prime Minister – more than a lakh files have been weeded out. As a result, two record rooms used to dump files have become available for alternative use.

Other measures, like auctioning of discarded materials, have opened up prime real estate inside the PMO. A top official says, “These efforts have helped to free 1,800 square feet of office space within the PMO premises at South Block.
This space now accommodates around 50 officials of Public Wing of the PMO, which earlier functioned from Rail Bhawan, due to space constraints at South Block.”
Soon after he took over, Mr Modi indicated cleanliness began at home. And, in the office. As a result, 12 truckloads of garbage were removed from the PMO atop Raisina Hill. The PMO staff was asked to work as volunteers under Principal Secretary to the Prime Minister, Nripendra Misra.
Once the babus rolled up their sleeves, they went from sorting files to removing weeds in the garden. Scrap, dismantled fittings and e-waste were removed from the from the store rooms.

PMO sources say the office has witnessed many changes since May 2014. This includes several productivity-enhancing and cleanliness-related initiatives, like standardising the processing of receipts and files.
An Electronic Mail Management System has been put in place, reducing the time taken to process public petitions from one month to a day. The only list that is getting longer is that of efficiency management systems being put in place.