NEW DELHI : BJP prime ministerial candidate Narendra Modi has once again sidestepped the issue of him apologising for the 2002 Gujarat riots.In an interview to a news channel, Modi said the Congress should account for its sins first and then ask for apology from others.
“There is no Modi wave it’s BJP’s wave this time,” Modi said when he was asked to express his views on Murli Manohar Joshi’s comments saying that there was no Modi wave in the country but only a BJP wave. 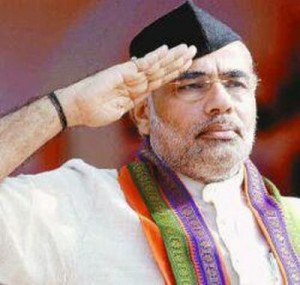 Speaking to TV9, the BJP leader said that he doesn’t dream of becoming ‘Bharat Bhagya Vidhaata’, but only thinks of the welfare of the 1.25 billion people of the country.When confronted with the question that the Gandhi ‘parivaar’ is rejecting the presence of a Modi wave, Modi said the Congress doesn’t has nothing else to say.
“During elections it is the ruling party which sets the agenda, however, this is for the first time in the history that it is not so the case and the agenda has been set by the electorate this time,” he said.
The Gujarat Chief Minister rejected the claims that he has become bigger than the BJP and said, “This can never happen and I cannot dream of such thing.”When asked about senior BJP leaders like LK Advani being annoyed with him, the BJP’s PM candidate asserted, “Whatever I am is because of the senior leaders of the BJP.”Clearing his stand on the slogan ‘Ab ki barr Modi Sarkaar’, the BJP strongman said, “Modi is just a name chosen by the BJP and he is just a small part of the party,” adding that the upcoming General elections are not Modi-centric.
Commenting on the issue of BJP workers chanting ‘Har Har Modi’ slogan, the Gujarat CM said that he was opposed to personality base politics. “During elections there are both good as well as bad slogans, whenever we find something objectionable I ask them to stop it.”