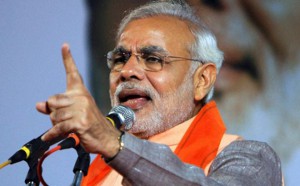 NEW DELHI: Days before the Bharatiya Janata Party-led National Democratic Alliance government is set to complete its first year in office, Prime Minister Narendra Modi on Tuesday exalted the progress achieved by his government since it assumed power in May 2014.
During the BJP Parliamentary Party meeting, which began at 9:30 am, the PM compared the achievements of his government with the previous Congress-led United Progressive Alliance government.The work done by our government in 10 months is better than that by the UPA government in 10 years, said Modi.
The PM also pointed out that a year old NDA government worked more than the UPA government in the department of foreign relations too.Reiterating the government’s stance on the issue of black money, the PM said he was satisfied with stringent laws made in this regard.
Addressing the media after the BJP Parliamentary Party meeting, Union Minister of State for Minorities Affairs Mukhtar Abbas Naqvi said the meeting discussed the work the government did in the first year of its inception.
Hailing the government for improving foreign relations, the PM said only the NDA government is capable of developing good ties with Pakistan. Naqvi also said it was the NDA government which solved issues with India’s neighbouring countries like Sri Lanka and Bangladesh.
The PM also said that India helped Nepal and Maldives during their time of crisis, added Naqvi.The BJP hailed the Prime Minister’s efforts towards cooperative federalism and setting in motion a strategy for inclusive development, and hoped it will succeed in fulfilling promises made to the people.
As it prepares to highlight the government’s achievements during the week-long anniversary celebrations, the BJP Parliamentary Party, in a unanimous resolution passed at its meeting chaired by Modi here, backed initiatives to ensure social security for poor and vulnerable sections of society and provide transparent and accountable governance.
“The BJP Parliamentary Party has commended Prime Minister Narendra Modi for arresting the drift in governance by infusing the much desired sense of purpose and for improvising the governance architecture through cooperative federalism, for providing transparent and accountable governance and for enhancing the country’s standing and image among the international community,” the resolution said.
“Prime Minister Narendra Modi told the party MPs that there will be week-long celebrations on completion of one year of NDA government and MPs will highlight the initiatives taken by the government in each of their constituencies,” Union Minister Mukhtar Abbas Naqvi said after the meeting.
The party had earlier said that Union ministers, MPs and functionaries will go to various parts of the country to tell people about the welfare measures taken for underprivileged sections and farmers as part of a week-long ‘Jan Kalyan Parv‘ from May 26 to June .
Union Minister Piyush Goyal said the party was unanimous in appreciating Modi’s leadership and hoped government will succeed in fulfilling the promises made. Parliamentary Affairs Minister M Venkaiah Naidu said while BJP was pursuing “politics of development” some sections of the political class are keen to promote the “politics of poverty”.
“For their own reasons, they want the people of our country to remain poor. We will not let this happen,” he said.Naidu said the MPs were a part of a historic verdict and congratulated them on completion of one year of their tenure.
He said people gave a mandate for corruption-free and responsive governance that would help them meet their aspirations through rapid economic development.Naidu said in pursuance of this mandate, the Government led by Narendra Modi is going to complete its first year in office on May 26.
“BJP MPs and workers can look forward to a future with our heads held high on account of what has been initiated and achieved during the last one year. Prime Minister Modi has imparted a new sense of purpose, vision and dynamism to governance during the last one year.”
“The PM has laid strong foundations for inclusive development and unleashed new energies to reach that goal. Our journey has begun well and we are confident of fulfilling the mandate given to the government by people during the next four years,” he said.
Naidu added that there has not been even a single instance of corruption or irregularity and it is a great beginning towards meeting the expectations of the people who were fed up with the ‘Scam India’ of the last decade.
\He said a comprehensive multi-layered strategy is being adopted “to reach the unreached, fund the unfunded and bank the unbanked”.Naidu said there were six pillars of their strategy that include ensuring social security for the vulnerable sections of society, empowerment of youth and other sections to enable harness their individual potential, direct attack on poverty through rapid economic growth, responsive governance through modernisation and cooperative federalism, besides a dynamic foreign policy to further national goals.
“We are conscious of the expectations of the people from our Prime Minister and the Government and we will live up to their expectations. While we are pursuing the ‘politics of development’, some sections of the political class are keen to promote the ‘politics of poverty’,” he said.
“During the last one year of our Government, there has been a turn around in the functioning of the Parliament despite determined efforts of some parties to stall legislation by all means. The compelling force of our legislative initiatives have had a positive effect on the functioning of Parliament,” he said.
Naidu highlighted the much-awaited economic integration of our country with the passage of a Constitution Amendment bill relating to introduction of GST by Lok Sabha and the Black Money Bill.
“We have sufficient reasons to hold our heads high and march ahead with renewed vigour and commitment for the welfare of our people and development of our country and live up to the expectations of the people. We need to do so by being constantly engaged with the people as desired by our Prime Minister and by working as effective bridges between the people and the government,” he said.