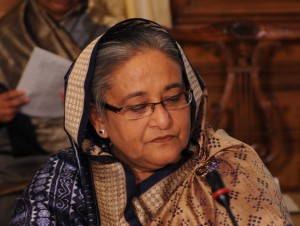 KOLKATA/DHAKA: As Bangladesh Prime Minister Begum Hassina is reported to have both `discussed and said to have handed over some documents’ to Indian Prime Minister Narendra Modi relating to a `section of Trinamool Congress’ Jammat connection,’ Dhaka-based liberals wonder if Indian Government would actually pursue those clues to book “culprits.’’

Incidentally, Trinamool Congress bitterly at war with an expansive Saradha chit fund scandal, everyday swallowing its prestige and tainting its political image, found Begum Hasina’s playing the card well with Modi to its embarrassment as well.

“What convinced Mamata Banerjee about A H Imran’s credibility as a politician – he was also associated with banned Simi?’’ asked a spokesperson of liberal Islamist political party in Dhaka.

Incidentally, during investigation into Saradha scam, it was dug up that “a huge amount of chit fund money went to pro-Pakistani Jammat in Bangladesh and Imran (now a party MP) played a big role to get the fund across the boarder.’’

According to TMC insiders, party’s Jammat connection will only lead to party’s doom in nine bordering districts in Bengal where “majority community feel threatened by Islamic fundamentalist elements who torture them.’’

“Why  do you think BJP won in Bashirhat Dakshin (South) when Modi and Amit Shah humiliated the pride of Bengal on several occasions, because common people feel scared about the way Jammat connected men enjoyed protection from TMC,’’ admitted a political commentator in Bengal.

Party leader Mamata Banerjee not known to have eaten up when criticized, is still surprisingly silent on these issues, especially about the Jammat connection.

While Mamata’s “retreat’’ is said to have regaled Bangladesh political camps on hope of hastening up Teesta River water treaty, but “it would damn the Bengal’s real interest in water sharing like Ganga water-sharing which left Ganga dying in Bengal,’’ said environmentalists.