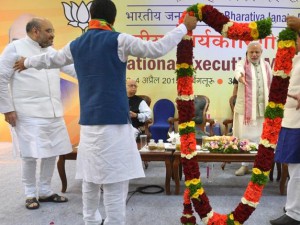 E: The Modi government is here to stay for 10-20 years, BJP president Amit Shah asserted in Bengaluru on Friday. He claimed that the new dispensation had ended the “reign of scams” and policy paralysis while changing the political culture in the country.
“Modi ‘sarkar’ [government] has arrived and will be in power for next 10-20 years. It will change the face of India,” he said In his inaugural address to the party’s National Executive Committee.

Mr. Shah lauded the 10-months rule of the Modi government, saying it has brought a perceptive change in the system of governance by bringing in transparency and ending policy paralysis. Ministers were now empowered unlike in the past when even the Prime Minister was not.
The BJP government had ended the “reign of scams seen during the 10-year UPA rule…. There is not a whiff of scam now,” he observed.Citing the record revenue earned by the public exchequer in coal and spectrum auctions, he said the Modi dispensation’s good governance was reflected in the complete transparency witnessed in the auctions, which he described as a big attack on corruption.

Mr. Shah termed a “great success” of Indian diplomacy the United Nation’s declaration of June 21 as International Yoga Day. It was because of the pro-active steps taken by the Prime Minister, he noted.
Mr. Shah said this meeting was being held amid enthusiasm that the party had emerged as the largest one that is set to have 10 crore members and there was need to convert the members into active workers. The party wouldl run campaigns for reaching out to the new members and for training around 15 lakh workers in political activism.
The BJP chief described 2014 as a year of victory for the BJP that brought the party to power at the Centre and later in States like Maharashtra, Haryana and Jharkhand and in partnership in Jammu and Kashmir.
Union Minister Prakash Javadekar later told reporters, “Mr. Shah was very happy that the first meeting of the BJP was held in Delhi on August 9 [Kranti Diwas] where we celebrated the formation of first-ever non-Congress government with full majority of its own in the country after Independence.2014 was the year of victory for the BJP, where BJP governments are in place in 12 States, including in eight States of its own. He termed this a big achievement. When we are meeting today, we are meeting as the largest party in the world, which is due to the efforts of the party workers.”
Mr. Shah listed out the various social campaigns that the party wants its workers to be involved in, Mr. Shah said the party had to fulfil the dream of Mahatma Gandhi in making the country free from manual scavenging, which is considered a blot on our society.Under the campaign, the party workers would reach out to 23 lakh persons involved in manual scavenging and help them rehabilitate in other occupations.
Mr. Shah laid stress on party men taking forward the ‘Beti Bachao, Beti Padhao’ campaign, which will help in creating gender sensitivity and also stop female foeticide. “We want to ensure that the girls should go to school and become an empowered and proud citizen of this country,” he said.
He also highlighted the ‘Swachh Bharat’ and the ‘Namami Ganga’ initiative for creating awareness across the country on the Clean Ganga project.Mr. Javadekar said, “These non-political initiatives will show that the BJP is a party with a difference. Other parties do only politicking and we want to go beyond politics and want to engage our workers in such concrete non-political campaigns which are essentially social reform campaigns.”
Speaking about the successful membership drive, he said the party would soon announce a mass contact programme that would reach out to each and every member across the country and help him turn into an active member.The party would embark on the training programme for over 15 lakh workers and the plan for this would be laid on the concluding day of the meet.
“For the mass contact programme, we will go door-to-door to talk and discuss with each member to turn them into workers. Because members are sympathisers, but we have to make them real workers,” Mr. Javadekar said, adding “the programme’s period and time table will be declared tomorrow.”
“It is not necessary that the party workers should do only political activity, they must also do social activity. For this we are launching social campaigns,” he said.

Mr. Shah said “the BJP is the only party, which is a true democratic party where internal democracy is intact and our leadership is not because of heredity but through their own hard work”.