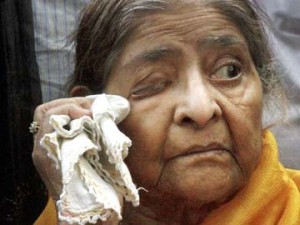 Ahmedabad :As a Gujarat court ruled that Narendra Modi would not face charges in the 2002 riots, 75-year-old Zakia Jafri, whose husband Ehsan Jafri was burnt alive by a mob, broke down but vowed to continue her long legal battle.

“Mr Modi can rest easy for the next 20 days, but not more than that,” said Mrs Jafri’s lawyer, declaring that they would challenge the ruling within a month. “We are up against the government, it is a long fight.”

Tanvir Jafri, her son, told NDTV, “My heart says we will get justice. We are disappointed but have not lost hope.”

Mrs Jafri, 75, has been fighting for justice for 11 years; she alleges that Mr Modi colluded with senior ministers, bureaucrats and the police to facilitate the communal violence that tore through the state.

On February 28, 2002, Ehsan Jafri, a former Congress MP, was attacked by a mob at Gulberg Society, a cluster of 29 bungalows and 10 apartment buildings housing mostly Muslims. The mob breached the boundary wall and torched houses. Mr Jafri was dragged out, hacked and burnt to death, along with 68 others. His frantic phone calls to police officers and senior politicians for help allegedly went unanswered.

“None of us can forget that night,” Mrs Jafri says.

In 2006, Zakia Jafri filed a complaint alleging the police had not registered FIRs against Narendra Modi, several other ministers and top officials. The police refused to register the complaint.

Two years later, the Supreme Court gave her reason to hope when it ordered the Modi government to reinvestigate nine riot cases, including the Gulberg society massacre.

After today’s order, Mrs Jafri told NDTV, “I am disappointed, but not saddened. My fight continues.”