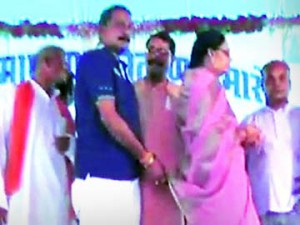 BHOPAL: A lawmaker in Madhya Pradesh finds himself in an embarrassing spot after being caught on camera wiping his hands on a former parliamentarian’s sari at a public event on Wednesday.Independent legislator Dinesh Rai was on stage at a function in Seoni when he was seen surreptitiously wiping his hands on the sari of former BJP MP Neeta Pateriya, who was apparently oblivious to it.
Mr Rai had soiled his hands with oil during the lamp-lighting ceremony for the launch of a crop insurance scheme for farmers . After wiping his hands, the 44-year-old lawmaker appears to make light of it, and some in the audience laugh.It was when the footage exploded on local channels that a worried Mr Rai reportedly called Ms Pateriya, twice, and apologized, claiming that it was a prank.”She is like my bhabhi (sister-in-law) and I just did it in fun,” he told reporters.
The 51-year-old parliamentarian had earlier laughed it off, likening the legislator’s antics to that of a “child playing with his mother.” But with TV channels playing the footage on loop, she is now less amused. She says she has left it to her party, the state’s ruling BJP, to decide on legal action.The two leaders have been rivals during polls; Ms Pateriya had defeated Mr Rai in the 2008 state elections.