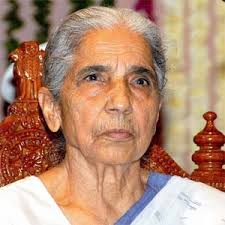 NEW DELHI :Kamla Beniwal, who had a running battle with Narendra Modi when he was Gujarat Chief Minister, was tonight sacked as Governor of Mizoram just two months before her tenure comes to an end.”The President has directed that Dr (Smt) Kamla shall cease to hold the office of the Governor of Mizoram,” a Rashtrapati Bhavan communique said tonight, exactly a month after she was shifted to Aizwal from Ahmedabad.
Kamla Beniwl. Ibnlivehe sacking order brings to an end the tenure of 87-year-old Congress leader from Rajasthan who battled with the Modi government over the appointment of Lokayukta and some legislations during her tenure in Gujarat.During her confrontation with Modi, Beniwal appointed retired Justice R A Mehta as Lokayukta in Gujarat against which the state went in appeal to the High Court and later the Supreme Court which upheld it last year. However, it was another story that Justice Mehta did not take up the post and Modi’s government named a new nominee.
Beniwal also sat over legislations passed by the state Assembly one of which provided for 50 per cent reservation for women in local bodies.Beniwal was first appointed as Governor of Tripura in October, 2009 the first woman to be appointed as governor in the Northeast. However, a month later she was appointed as Gujarat Governor.Beniwal is the second Governor to be sacked after the removal of Puducherry Lt Governor Virendra Kataria. Soon after the Modi Government assumed office, some Governors were forced to resign while a few a resisted and are still in office.
Interestingly, another Congress leader Margaret Alva appointed by the UPA government was allowed to conclude her tenure in Jaipur yesterday.