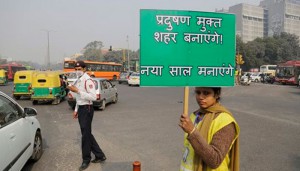 NEW DELHI: The Delhi government on Friday indicated in the High Court that it may extend the Odd-Even scheme in the capital by one more week as the plan has helped stop pollution from rising further.
Presenting arguments in the Delhi High Court which is hearing a batch of petitions against the Odd-Even scheme, counsel for the Aam Aadmi Party government Harish Salve said that the formula has helped reduce pollution at peak hours.
“There are definite positive results of Odd-Even formula. On January 5, PM levels were 391, much less than over 500 in December,” the counsel told the court.
Salve added that the government needs data for at least 15 days to conclude whether the scheme has worked.On Wednesday, the court had asked the government if the formula could be wound up by Friday, i.e. today.
A division bench of Chief Justice G Rohini and Justice Jayant Nath today, meanwhile, asked the government why it has restricted only cars under the Odd-Even scheme, before posting the matter for further hearing on Monday.
“Is it really necessary to have it for two weeks (15 days)? Can’t it be confined to eight days? Can you end it on Friday? People are facing inconvenience. Take instructions,” the bench had asked the government on Wednesday.
“It was a pilot project. You must have data (air pollution) with you now. Show us how much the pollution has reduced. The people of Delhi supported you despite inconvenience. There is no adequate public transport,” the bench had added.
Delhi Transport Minister Gopal Rai said after the court hearing, “Odd-Even formula will continue till January 15. After that we will look into the statistics and decide the further course of action.”

“We are collecting efficient data with regard to strength and weakness of Odd-Even plan. The government will take a call after reviewing all data post January 15,” he added.