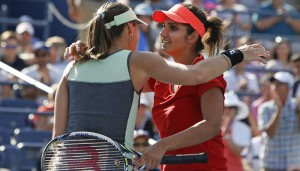 NEW DELHI: Indian tennis stars Sania Mirza and Leander Paes enter finals at the 2015 US Open on Thursday, partnering with Swiss legend Martina Hingis in their women’s doubles and mixed doubles outings respectively.
In the high-stake second mixed doubles semi-finals, Paes and Hingis fended off a strong challenge from India’s Rohan Bopanna and Chinese Taipei’s Yung-Jan Chan to make the final.
The fourth-seeded Indo-Swiss pair won the match in straight sets 6-2,7-5 in 61 minutes at Flushing Meadows’ Court 17. They will play unseeded pair of Bethanie Mattek-Sands and Sam Querrey. The all-American team beat Andrea Hlavackova of Czech Republic and Lukasz Kubot of Poland 6-4, 6-3 in the first semi-final.
This will be their third Grand Slam in 2015, having won the Australian Open and Wimbledon. They, however, suffered a second round exit at Roland Garros, where Mattek-Sands and Querrey won the title.
Earlier, Hingis partnered Indian doubles sensation Sania Mirza to make the women’s doubles final with a straight sets win over their 11-seeded Italian opponents Sara Erani and Falvia Penenetta.
The top-seeded pair won the match 6-4, 6-1 in 77 minutes at Court no. 17. Hingis-Mirza pair are making their second successive Major final after winning the title at All England Club in July.
In the final, they will play the winner of the second semi-final between the fourth-seeded pair of Casey Dellacqua (Australia) and Yaroslava Shvedova (Kazakhistan) and  Anna-Lena Groenefeld (Germany)  and Coco Vandeweghe (United States).