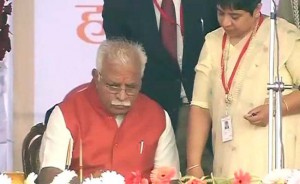 PACHKULA:Manohar Lal Khattar took oath as the first BJP Chief Minister of Haryana on Sunday.The occasion was historic for the BJP as it is for the first time that the party has come to power in Haryana since the state’s inception in 1966.

Mr. Khattar, a 60-year-old RSS man and a first-time legislator, took oath as the 10th chief minister of Haryana today in the presence of PM Narendra Modi. Along with Mr Khattar, six cabinet ministers and three ministers of state (independent charge) were also sworn in by Haryana Governor Kaptan Singh Solanki in Panchkula town, adjoining Chandigarh, the common capital of both Haryana and Punjab. The venue is a departure from the past, which earlier used to be Chandigarh.

Top leaders of the BJP, including Home Minister Rajnath Singh, External Affairs Minister Sushma Swaraj and senior leader LK Advani, were present for the swearing-in ceremony. However, former Chief Minister Bhupinder Singh Hooda, who was also invited, decided to skip the event. Mr Khattar is Haryana’s first non-Jat chief minister in 18 years; Jats have for long dominated politics in the state as the single biggest chunk of voters.
In the days ahead, the party, which has won a majority on its own for the first time in Haryana, will have to do a balancing act. Mr Khattar was elected at a meeting of the BJP’s new MLAs last week, edging out other contenders like Captain Abhimanyu, a Jat leader.
He was reportedly favoured by the leadership for his clean image. ML Khattar is an unmarried former RSS pracharak or functionary, who was deputed to the BJP 20 years ago. He has worked closely with Prime Minister Narendra Modi when the latter had charge of the state in the 90s.
The PM began his Haryana campaign from Karnal, Mr Khattar’s constituency. BJP created history by coming to power on its own for the first time in Haryana, since its inception in 1966.
In the 90-member Haryana Assembly, the BJP bagged 47 seats, Indian National Lok Dal (INLD) won 19 seats and its ally Shiromani Akali Dal (SAD) got one, the Congress won 15 seats, Haryana Janhit Congress (HJC BL) won two seats, Bahujan Samaj Party (BSP) managed one seat and five seats went to independent candidates.