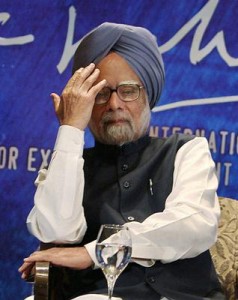 NEW DELHI : In his last address to the nation, Prime Minister Manmohan Singh Saturday acknowledged his debt to the country that empowered him, “an underprivileged child of Partition”, to occupy the high office of prime minister and wished the incoming government every success.He said the just concluded national election “deepened the foundations of our democratic polity” and its judgement should be respected by all.
Hours before demitting office, Singh said, in a brief address in Hindi and English, he is confident about the future of India.“I firmly believe that the emergence of India as a major powerhouse of the evolving global economy is an idea whose time has come. Blending tradition with modernity and unity with diversity, this nation of ours can show the way forward to the world. Serving this nation has been my privilege. There is nothing more that I could ask for,” he said.
The prime minister, who has helmed two successive UPA governments since 2004, said when he was entrusted with the responsibility of leading the nation “I entered upon it with diligence as my tool, truth as my beacon and a prayer that I might always do the right thing”.
“Today, as I prepare to lay down office, I am aware that well before the final judgment that we all await from the Almighty, there is judgment in the court of public opinion that all elected officials and governments are required to submit themselves to.”Remarking on the election results that have given the Congress its worst drubbing, Singh said: “Each one of us should respect the judgement that you have delivered. The just concluded elections have deepened the foundations of our democratic polity.”
“As I have said on many occasions, my life and tenure in public office are an open book. I have always tried to do my best in serving this great nation of ours.”He said in the past 10 years of United Progressive Alliance rule, the country has “seen many successes and achievements that we should be proud of. Today, India is a far stronger country in every respect than it was a decade ago. I give credit for these successes to all of you. However, there is still vast latent development potential in our country and we must collectively work hard to realize it.”
“As I leave office, my abiding memory will be the love and kindness that I have always received from you. I owe everything to this country, this great land of ours where I, an underprivileged child of Partition, was empowered enough to rise and occupy high office. ”“It is both a debt that I will never be able to repay and a decoration that I will always wear with pride.”“I wish the incoming government every success as it embarks on its task and pray for even greater successes for our nation.”