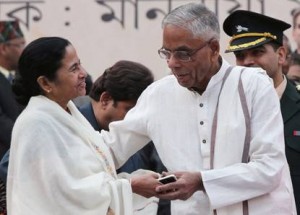 KOLKATA: As BJP swings into action to change men in Raj Bhawans, a UPA II-appointed Bengal Governor, also former national security advisor MK Narayanan’s fate sets off speculation among political ruling parties and the Left as well.
While both Narayanan nor Chief Minister Mamata Banerjee didn’t open their mouth as yet, but senior TMC leader, like, Subrata Mukherjee today told media, “it’s better to allow the present incumbent to continue as change in Centre should not religiously force changes in Raj Bhawans.’’
Apparently, Banerjee’s Government is worried to begin a new innings with a BJP-appointed new governor for several political issues.Sources said Mamata Banerjee had had a brief meeting with Narayanan but media was not briefed on which issue the meeting took place!
“An unpre-scheduled meet we know nothing about what transpired,’’ Government sources said.While, political sources said the state BJP leadership might know who might replace him but so far preferred to remain tight-lipped.
Worries however mild also haunts CPI(M)-led Left Front for reasons while Narayanan’s presence since 2010 saw front getting dessimated, he never spared TMC Government either on cabalistic attitude in attempts to introduce in education or political violence. Though not an outspoken governor like Gopal Krishna Gandhi Gandhi, he somehow maintained a political balance with TMC Government though essentially a Congress appointed man.
Incidentally, an uncanny silence over Raj Bhawan is not greeted well politically by any party, if BJP government has decided for a change, instead of sending feelers, it should act,’’ said a veteran political commentator, adding, “it was the political tradition introduced by great Congress leaders in governments.’’