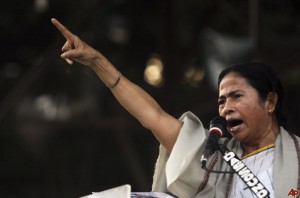 ASANSOL (WB): A day after Prime Minister Narendra Modi launched a no-holds-barred attack on her, West Bengal Chief Minister Mamata Banerjee on Friday said his comments do not behove the office he holds and termed his BJP “Bhayanak Jali Party (Dangerously Fraud Party)” while daring him to arrest her.
“I fight with my head held high. I never bow my head before anyone. The Prime Minister can arrest me if he so wishes, I don’t care,” she said addressing an election rally in Asansol – the same area where PM Modi held one of his three meetings on Thursday.
Ms Banerjee told the Prime Minister that she was not his “domestic help” and alleged he spoke like an RSS volunteer.”Making big speeches is easy but working for people is difficult. The Prime Minister spoke like a Swayam Sevak shakha worker,” she said.
Regretting that PM Modi made personal attacks on her whenever he came to the state, Ms Banerjee said one needed to be more retrained in his public utterances.
“Whenever Modi ji comes to Bengal, he makes personal attacks which are in extremely bad taste. But just because the PM made personal attacks against me, I will not do the same,” added the Chief Minister of West Bengal.
“I do not make personal attacks even if I am politically opposed to someone. I do not indulge in such personal attacks against (PM) Modi, or (CPI-M leader) Buddhadeb Bhattacharjee, even though I don’t like their politics,” she said.”It doesn’t behove a prime minister to make such utterances,” she added.
In an apparent reference to PM Modi’s radio show “Mann ki Baat”, Ms Banerjee said: “On the radio, one hears only (PM) Modi’s Mann ki baat, as if he is God.”
Countering PM Modi’s remarks that Trinamool Congress (TMC) stands for “Terror”, “Maut” (death) and “Corruption”, Ms Banerjee called the BJP “Bhayanak Jaali Party“.