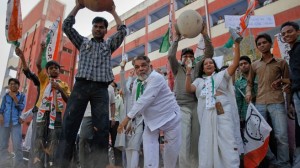 MUMBAI : Maharashtra Navnirman Sena MLA Pravin Darekar and 71 workers were arrested on Monday for vandalising a toll booth in Dahisar. The MNS workers were charged with sections of arson, riot, damage to public property.
Earlier, Deputy Chief Minister Ajit Pawar warned of strong action against MNS workers for vandalising toll booths across the state. “The vandalism will not be tolerated. We will take action,” he said. The move came even as four activists of the MNS were arrested on Monday for creating trouble at the Vashi toll booth and defacing it. Two FIRs have also been registered at Navghar and Dahisar.
The violence followed after party supremo Raj Thackeray asked his workers not to pay fee at the toll plazas even if it required resorting to violence.
“I am instructing all MNS workers, colleagues and people not to pay toll at any toll booth in Maharashtra from now on. If someone opposes you, fight with them,” Thackeray said.
Toll booths across the state including Aurangabad, Beed, Pune (rural), Nashik, Thane, Airoli and Nagpur were targeted by the zealous workers of MNS. Some MNS workers were arrested after they clashed with policemen at Dahisar.