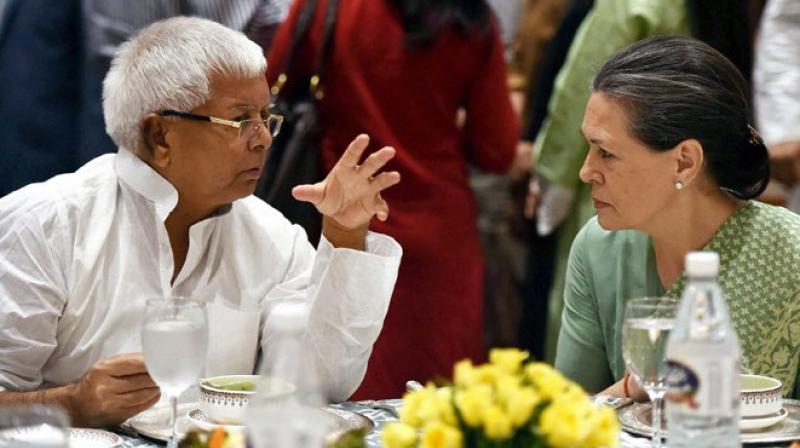 NEW DELHI :  Congress chief Sonia Gandhi, whose offer to run for President was recently rejected by veteran politician Sharad Pawar, got a dose of feel-good from someone who has never let her down. Bihar’s Lalu Yadav has assured her that he will without question back any candidate that she picks to be a united Opposition’s candidate for the presidential elections in July.

“Madam, you take the decision and we are with you,” Lalu Yadav told Mrs Gandhi when she phoned him on Wednesday. Sonia Gandhi, however, told Mr Yadav that she would not be able to attend the mega rally of opposition parties that he plans in August as her frail health keeps her from travelling out of Delhi.
Lalu Yadav, 69, whose Rashtriya Janata Dal (RJD) is an ally of the Congress in Bihar, then requested the presence at his rally of Sonia Gandhi’s son and deputy  Rahul Gandhi.Mr Gandhi, 46, does not share his mother’s enthusiasm in counting Lalu Yadav among the Congress’ chief allies. He has distanced himself from Mr Yadav over the many corruption cases against him and had in 2013 famously torn up a copy of a draft law that could’ve prevented Lalu Yadav, convicted in one of the cases, from being banned from contesting elections.
The Congress was in power at the Centre then and Mr Gandhi’s public disapproval meant that the Ordinance or executive order would not see light of day. Mr Yadav is barred from holding public office and cannot contest elections for six years. He has been known to take jibes at Mr Gandhi in private, including alleging that the Congress leader surrounds himself with acolytes and “sons of rajas and maharajas.”
When bitter political foes Nitish Kumar and Lalu Yadav decided to come together to take on the BJP in Bihar in assembly elections two years ago, third ally Rahul Gandhi stepped in to paper over differences and insisted that Mr Kumar lead what they called the Grand Alliance as its candidate for Chief Minister. The RJD saw a deep anti-Lalu bias in Mr Gandhi’s insistence – they wanted the chief minister to be chosen after the elections.
The pre-election deal ensured that Nitish Kumar became Chief Minister of Bihar for a third time despite Lalu Yadav’s party winning the most seats.His latest request may not find favour with Rahul Gandhi amid new allegations of corrupt land deals against Lalu Yadav. Tax officials have conducted searches this week at different places in and around Delhi as part of their investigations. Last week, the Supreme Court refused his request to decide that he will be tried in five different cases for corruption linked to his term as Bihar Chief Minister in the 1990s.
Lalu Yadav has alleged that the BJP, in power at the Centre, is misusing its power to exact political revenge. His August rally will bring together anti-BJP parties, says Mr Yadav, a big supporter of a national alliance of opposition parties to take on the ruling party. Sonia Gandhi’s initiative to shortlist a joint opposition candidate to contest the presidential election is seen as another test for such an alliance.

West Bengal Chief Minister Mamata Banerjee has confirmed her Trinamool Congress’ attendance at Mr Yadav’s rally. He has also contacted other opposition leaders like the Left’s Sitarama Yechury and Samajwadi Party founder Mulayam Singh Yadav. Sushil Kumar Modi, the BJP’s top leader in Bihar, has suggested that the plans are premature because Lalu Yadav is “likely to be in jail” by August.ndtv.