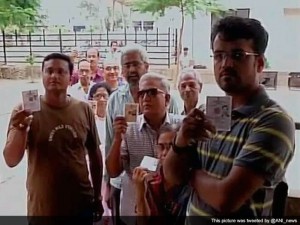 NEW DELHI : Maharashtra and Haryana are voting today for new governments. The BJP decided to fight these elections alone and has put all its eggs in the Narendra Modi basket, counting on the Prime Minister’s popularity to wrest both states from the Congress, which has ruled them for years. Votes will be counted on October 19, Sunday.
In Maharashtra, brisk polling has been seen in the morning. Among the early voters were former deputy chief minister Ajit Pawar in Baramati, Leader of Opposition in Legislative Council Vinod Tawde in Mumbai, BJP’s Pankaja Munde in Beed and actor Rekha in Mumbai.
In Haryana, long queues could be seen outside polling stations. Around 13% people came out to vote till 10 am.These are the first state elections since the BJP posted a grand victory in the national elections this year. It has unambiguously fought these elections with PM Modi at the centre of its pitch and many see it as a test of whether what the BJP calls the “Modi wave” endures.
The BJP dumped the Shiv Sena in Maharashtra and Kuldeep Bishnoi’s Janhit Congress in Haryana to go it alone. It needs big wins in today’s elections to up its numbers in the Rajya Sabha where the central government it leads is in a minority.In Maharashtra, two alliances – the BJP-Shiv Sena and the Congress-Nationalist Congress Party – came apart over seat sharing days before voting,
making this a four-cornered contest with Raj Thackeray’s Maharashtra Narvnirman Sena or MNS providing a fifth.In this morning’s edition of his party’s newspaper Saamna, Shiv Sena chief Uddhav Thackeray made his most direct reference yet to his chef ministerial ambitions.
“If a ‘chaiwala’ can become the prime minister, I can definitely become the state’s chief minister,” Mr Thackeray, 54, said, in reference to PM Modi’s younger days as a tea seller.Who would be chief minister was at the core of the BJP’s fallout with the Shiv Sena, its ally of 25 years.
The BJP has not projected anyone as its candidate for CM, but Maharashtra unit chief Devendra Fadnavis and senior leader Eknath Khadse are said to be frontrunners.In Haryana, the BJP, the Congress and OP Chautala’s Indian National Lok Dal (INLD) will slug it out. Bhupinder Singh Hooda, 67, Haryana’s chief minister for the last decade played badminton in Rohtak this morning as the state began to vote. He is seeking a third term.
The front runners for chief minister if the BJP wins in Haryana are Captain Abhimanyu, a young former Armyman and jat leader, and union minister Rao Inderjeet Singh, who was earlier this year imported from the Congress.Voting is being held for 288 assembly seats in Maharashtra and 90 seats in Haryana. About 10 crore people are expected to vote today.The BJP had harvested a bumper crop in the national elections this year in both states. In Maharashtra, the BJP-Shiv Sena combine had picked up 42 of the 48 Lok Sabha seats, decimating the competition. Of these the BJP had the bigger share at 23.

In Haryana, the BJP had won seven of 10 Lok Sabha seats. Two were won by the INLD, whose 79-year-old chief OP Chautala had to go back to jail last week after he was spotted at an election campaign while out on bail on medical grounds. The INLD fancies its chance at winning a number of seats despite that.