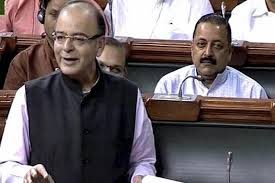 NEW DELHI : The long-pending GST bill was approved by Lok Sabha Wednesday after a walkout by Congress even as government vowed to compensate states for any revenue loss and assured that the new uniform indirect tax rate will be much less than 27 percent recommended by an expert panel.
The Constitution Amendment Bill to implement the Goods and Services Tax (GST), originally mooted by the UPA, was passed by 352 votes against 37 after the government rejected the opposition demand of referring it to Standing Committee.
Prime Minister Narendra Modi was not present in the House at the time of voting.Opposition members moved several amendments to the bill which were negated. Some members like Saugata Roy of Trinamool Congress and B Mahtab did not move some of the amendments after assurances by the Finance Minister.
GST, which is proposed to be implemented from April 1, 2016, will subsume excise, service tax, state VAT, entry tax, octroi and other state levies.
Replying to the debate on the bill before Congress walked out, Finance Minister Arun Jaitley said the proposal to reform the indirect taxes has been pending for the last 12 years and his predecessor P Chidambaram had also mooted it during UPA rule.

Rejecting the Opposition demand for referring the Bill to the Standing Committee, he said the panel has already examined various provisions of the new legislation and several of its suggestions have been incorporated.
“A bill is not a dancing instrument that it will be jumping from Standing Committee to Standing Committee,” he said.Commending the bill, he said this is a “very important moment” because the whole process of indirect taxation in India will change once the GST is implemented.
With regard to a recommendation of an expert panel for revenue-neutral GST rate of 27 percent, Jaitley said it is “too high” and will be “much diluted”.He said GST would ensure seamless and uniform indirect tax regime besides lowering inflation and promoting growth in the long run as he sought to allay concerns of the states that they would be hurt by its implementation.
Seeking to address states’ concerns, the Finance Minister said they will be compensated by the Centre for five years.
“Our clear understanding with the states is, in a tapering manner the losses incurred by the states will be fully compensated for five years,” he said.
As per the GST structure, 100 percent compensation would be provided for first three years, 75 percent for fourth year and 50 percent for the fifth year.
AIADMK leader M Thambidurai, who is Deputy Speaker of the House, questioned what will happen if states lose revenue even after five years and wanted a guarantee in the proposed Act to compensate.To this, Jaitley said GST Council will consider all such issues and the Centre will under-write the loss.
He said concerns of both manufacturing states like Maharashtra, Tamil Nadu and Gujarat, and other consuming states have been taken into account and states would stand to gain by implementation of GST.
The new measure will also benefit mineral-producing states as well, Jaitley said after members from Odisha questioned about the fate of their states.Responding to members’ concerns that 27 percent revenue-neutral tax rate for GST as proposed by an expert panel would fuel inflation, Jaitley said, “A 27 percent RNR will be too high… Government or GST Council has not decided on the rate… This figure is going to be much diluted.”
The reform of the indirect taxation was initiated by the Kelkar Committee in 2003 following which the UPA government in 2006 proposed a GST. The Bill had initially been brought in 2011.
Questioning opposition by Congress to the bill, Jaitley recalled that Chidambaram had been pushing it earlier.
To this, Congress leader Veerappa Moily said this was not a matter between two Finance Ministers.Hitting back, Jaitley said, “you may have disowned all of your Finance Ministers, but the country cannot”.”It is only erroneous to take GST as a UPA-NDA issue. GST is a Centre and state issue,” he said.
Asserting that the government is committed to cooperative federalism, Jaitley said “Federalism means strong states but it doesn’t mean a weak Centre.” He was responding when some members questioned why the Centre should have a veto power in voting GST Council even while having 1/3rd weightage in voting.
As states demanded that the voting power of the states in the GST Council be increased from two-third at present, he said “India is a Union of States. What you are suggesting … the consequence would be so immense.. The Centre and states will have to work together to reach a consensus”.
GST, which has been pending since 2006, will be the biggest indirect tax reform since 1947. The Constitution Amendment Bill on GST was introduced in the Lok Sabha in December 2014.
Once GST is implemented, the Centre and states will have concurrent power to levy tax on goods and services.
“I do not foresee any state incurring a loss and the Constitution Amendment Bill provides that they would be compensated for five years,” Jaitley said.To address the concerns of states on account of transition to a new indirect tax regime the Centre has allowed states to levy 1 percent additional tax on inter-state trade for a period of two years.
Besides, petroleum and petroleum products would not come under the GST levy till a date recommended by the GST Council.Once GST is implemented, the Centre and states will have concurrent power to levy tax on goods and services.
Jaitley said once the Centre doled out a package which includes 5 year compensation, 1 percent additional tax and non taxation of petroleum products, the manufacturing states came on board.
The proposed GST Council will have Union Finance Minister as its Chairman and comprise two-third of members from states and one-third from the Centre. The decision of GST Council will have will need to be approved by a three-fourth majority.
“Necessarily cooperative federalism would be at play.. To reach three-fourth both Centre and states would have to work together,” he said.
As regards a proposed Revenue Neutral Rate (RNR) for GST at 27 percent, Jaitley said: “I straightaway concede that 27 percent would be very high”.
He said the 13th Finance Commission had suggested 18 percent as a possible figure and hence the rate would have to be worked out.RNR is the rate at which there will be no revenue loss to the states after GST implementation. The RNR for GST is under consideration and a final view on this would be taken by the GST Council.