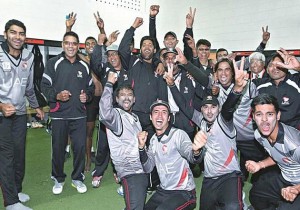 It has been close to two decades since the United Arab Emirates (UAE) played in a World Cup. The 1996 edition was its last appearance where it managed a solitary win over The Netherlands.

The present team is made up of a bunch of amateur cricketers and has two 40-somethings at the helm – Mohammad Tauqir the captain and Khurram Khan his deputy. The latter in particular is an interesting character. He works for Emirates Airlines and manages the odd cricket match in his spare time.

For more than a decade, he has been the country’s most outstanding cricketer and as captain played a stellar role in getting his team through to the World Cup. Yet, the UAE selectors replaced him as captain with Mohammad Tauqir, in what they described as a chance for Tauqir to “showcase Emirati leadership.” Khurram is an expatriate from Pakistan.

Still, much of the team’s chances will depend on Khurram. Going into the World Cup, the 43-year-old has been in excellent form. He scored more than 1000 runs in limited overs cricket in 2014. But he will also seek assistance from wicketkeeper-batsman Swapnil Patil, who was his team’s second-highest scorer at the World Cup Qualifier.

Ever since Aaqib Javed took over in 2012, the team has steadily risen, with his partnership with Khurram working well. It even qualified for the World T20 last year for the first time ever.

So, how the change in the top leadership will affect the chances is yet to be seen but Javed believes that the team can deliver on the goal of two wins at the World Cup.

But grouped as it is with India, South Africa, Pakistan, Zimbabwe, West Indies and Ireland, it looks highly unlikely.