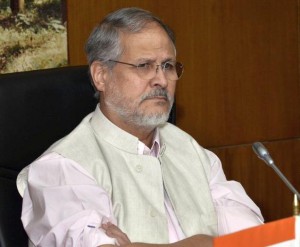 NEW DELHI: Escalating his confrontation with the Aam Aadmi Party government, Lt Governor Najeeb Jung on Wednesday cancelled all appointments made by it in the last four days, asserting he was the sole authority in matters of ordering transfer and posting of bureaucrats.
In a letter to Chief Minister Arvind Kejriwal, the Lt Governor challenged AAP government’s order to bureaucrats not to follow his directives without securing approval from the CM or any other minister, maintaining he has the power to decide on transfers and postings.Mr. Jung also contested AAP government’s instructions to the officials to not route files through his office, saying he has been vested with power to decide on major policy issues.
In the letter, Mr. Jung explained constitutional provisions and norms laid down in Government of NCT of Delhi Act and Transaction of Business rules of the Delhi Government, and asked the AAP government to follow the rules and procedures.
Mr. Jung said orders pertaining to transfers and postings by AAP govt in the last four days were not valid as they did not have his approval.In a directive on Monday, Mr. Kejriwal had asked the bureaucrats including the Chief Secretary to first consult him and other Ministers before acting directions from the LG.
On Tuesday, both Mr. Kejriwal and Jung had taken their bitter fight to President Pranab Mukherjee, accusing each other of violating the Constitution and overstepping their respective jurisdictions.
On Wednesday, Mr. Kejriwal asked Prime Minister Narendra Modi to allow the city government to function “independently” and accused the Centre of trying to run the Delhi administration through Jung.In a letter to Mr. Modi, Mr. Kejriwal mentioned about the posting and transfers made by Jung and said the elected government must have a say in distribution of work to senior officials.
The appointment of Shakuntala Gamlin as acting chief secretary last week had triggered a full-blown war between the AAP government and Jung with Kejriwal alleging that the LG was trying to take over the administration. Each side has since appointed some officials in senior positions which were declared void by the other.