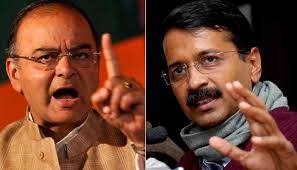 NEW DELHI: In what is likely to trigger a fresh confrontation between the Centre and the Aam Aadmi Party government here, the office of Delhi Lt Governor Najeeb Jung issued a notification on Friday declaring the probe panel constituted by it to look into the alleged irregularities in the Delhi cricket body – DDCA – as illegal and unconstitutional.
The move could trigger a fresh war of words between the Arvind Kejriwal government and Centre as the two have been at loggerheads over the issue.
Delhi LG had earlier told the Centre that Arvind Kejriwal government’s move to order an independent enquiry into the alleged scam in Delhi and District Cricket Association (DDCA) is legally invalid.DDCA scam: Jaitley records statement, accuses Kejriwal, AAP leaders of making false claims
Jung had written to the Home Ministry saying the Commission of Inquiry Act, 1952 empowers only the Centre and state governments to appoint a commission of inquiry.Since Delhi is a Union Territory, a commission of inquiry can only be ordered with the concurrence of the Centre, through the LG, Jung is believed to have said in his letter.
Chetan Chauhan slams Arvind Kejriwal’s ‘sex seeking’ allegations against DDCA official, asks for proof
However, Delhi CM Arvind Kejriwal had strongly objected to the letters from LG’s office being leaked in media.
Delhi government and now suspended BJP MP Kirti Azad have accused Finance Minister Arun Jaitley of corruption in DDCA during his tenure as president. Kejriwal had even demanded Jaitley’s removal from the Union Cabinet for an independent probe into the issue.
‘Come to my place at night’ – DDCA official told junior cricketer’s mother for son’s selection, claims Arvind Kejriwal
Importantly, former Solicitor General Gopal Subramanium, who was chosen by Delhi government to head the probe the alleged DDCA scam, had earlier said that he will begin investigation only after he gets a go-ahead from the Delhi L-G.
Meanwhile, the BJP had said due to political bitterness Congress was undermining the report of an inquiry done during its own government’s time noting that it had found nothing against Jaitley when he headed the DDCA.