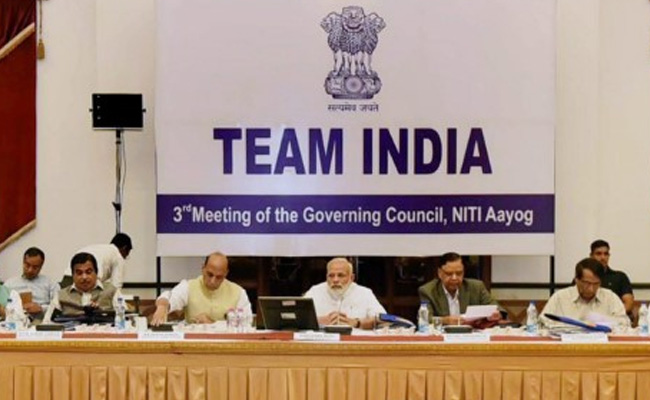 NEW DELHI : Prime Minister Narendra Modi made another pitch on Sunday for holding simultaneous elections to the Lok Sabha and state assemblies and backed shifting to a January-December financial year.
PM Modi, who was addressing chief ministers at a meeting of plan body NITI Aayog, asked states to consider advancing the fiscal year to January-December, saying it would help to prepare budgets as soon as agricultural income is received. India currently operates on a April-March fiscal year.
Prime Minister Modi was delivering closing remarks at the day-long third meeting of the Governing Council of the NITI Aayog. He said he had received suggestions that the financial year be shifted and urged states to take the initiative.

The Prime Minister said that in a country where agricultural income is exceedingly important, budgets should be prepared immediately after the receipt of such income for the year.

PM Modi had earlier set up a committee to examine shifting the financial year. This year the presentation of the union budget was advanced from the end of February to the 1st of that month.

PM Modi said in his speech that the country has for long suffered from economic and political mismanagement. “Because of poor time management, many good initiatives and schemes have failed to deliver anticipated results,” he said.

He also called for carrying forward the debate on holding simultaneous elections to Parliament and state legislatures. “The Prime Minister said if the elections are held simultaneously, then political parties could just focus on them once in five years and then use the rest of the period to do serious work,” NITI Aayog  Vice Chairman Arvind Panagariya told reporters after the meeting.

PM Modi urged states, local governments and NGOs to decide goals for 2022 and work in mission mode towards achieving them. He called on the chief ministers state governments to work with the Centre as to build “the India of the dreams of our freedom fighters” by 2022, the 75th anniversary of India’s Independence.

He also called upon states to “speed up capital expenditure and infrastructure creation” to spur growth. “NITIAayog is working on a 15-year long term vision, 7-year medium-term strategy, and 3-year action agenda,” PM Modi said, adding that the vision of ‘New India’ can only be realised through the combined efforts and cooperation of all the states.
The plan think tank’s third meeting was held at the Rashtrapati Bhavan, 21 months after the last meeting. West Bengal chief minister skipped the meet and sent her finance minister. Delhi Chief Minister Arvind Kejriwal and Meghalaya Chief Minister Mukul Sangma did not attend the meeting either.ndtv.