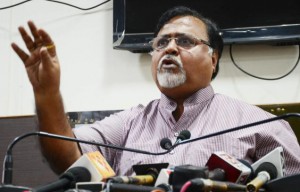 KOLKATA: Who’ll listen to Prime Minister Narendra Modi’s speech on Teacher’s Day? And come 5th September, despite State School Department ‘s circular to several government schools, State Education Minister  Partha Chattarjee told media men, not only he did not know about “such circular,’’ but “a few people circulated a circular which wasn’t even signed.
I will take action against these men.’’Interestingly, when such talks first appeared in media, some academicians intellectuals dubbed it as “Stalinist and outright dictatorial.’’
“I would suggest let’s keep the students free from politics or even a shuttle hints towards it,’’ said a former vice-chancellor of top university.“I am no apologist of any party or ideology, CPI(M) has done enormous damage to state education by politicizing it, so TMC would be doing unless it stopped interfering in student politics, they would just repeat it,’’ he said.But even non-academicians unless they woe a political link, criticized and eventually empowered TMC hands in objecting to Modi’s speech.
“We want any honest statesmen who can mix with students and share their problems and share their happiness, frustration and success, it’s better, present-day politicians keep off students,’’ said an old academician who still teaches in a college.
Paradoxically, yet if PM programme don’t reach students’ ear, Mamata Banerjee’s desire to win “an one-sided political game,’’ she also got a little crushed out with academicians and intellectuals advising to students to keep off present-day politicians.’’ Though HRD Minister Smitri Irani having clarified that listening to the speech “isn’t mandatory,’’ and there seems no immediate escape from the damage