PATNA: In an embarassment to RJD chief Lalu Prasad, his wife and former chief minister Rabri Devi and his daughter Misa Bharti lost their elections to the Lok Sabha from Saran and Patliputra parliamentary constsituencies respectively.Rabri Devi was defeated by Bharatiya Janata Party candidate Rajiv Pratap Rudy in Saran, while in Patliputra, Misa Bharti was defeated by BJP’s Ram Kirpal Yadav, a former RJD leader. 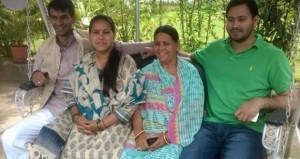 The Rashtriya Janata Dal (RJD) supremo had worked overtime in both constituencies for his wife and daughter as it was a prestige issue for him. Saran is considered home turf for Lalu Prasad as he had won the Lok Sabha polls for the first time in 1977 from there. In the 2009 Lok Sabha polls, he won from Saran by over 50,000 votes.He was defeated in Patliputra in 2009 by over 10,000 votes by the Janata Dal-United, at that time an ally of the BJP.