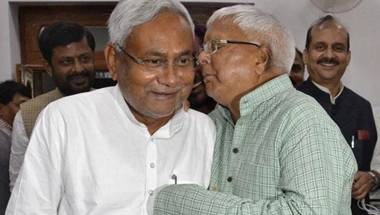 PATNA: So happy was Lalu Yadav last night over what he perceives as a mended partnership with Bihar Chief Minister Nitish Kumar that he dunked a ladoo in his bedtime glass of milk. But the celebration may be premature – and worse, one-sided. While Lalu Yadav’s party has said it’s back to business as usual – and he has asked his legislators to do taiyyari for a big rally he is planning next month – the Chief Minister and his aides have said nothing about a rapprochement, triggering the belief that if, indeed, a reconciliation is in effect, it is temporary.
Last evening, Nitish Kumar, 66, met for 45 minutes with his deputy, Tejashwi Yadav, who is Lalu Yadav’s 28-year-old son. At their first private meeting since Tejashwi and Lalu Yadav were accused of corruption by the CBI in a case which involved searches at their residence, the young politician presented an elaborate defence, vetted by lawyers and his father, to his boss.

Sources say that before the conferral, Nitish Kumar spoke to Lalu Yadav on the phone – only their second conversation since the corruption scandal broke on July 8.An explanation had been demanded by the Chief Minister nearly two weeks ago as the minimum requirement for keeping the alliance alive, though he made it clear that what he would really like is for Tejashwi Yadav to resign.

The Yadavs and their party, the Rashtriya Janata Dal, blustered that would not happen, further angering Nitish Kumar. With the partnership on the brink of collapse, Nitish Kumar turned for mediation to Congress chief Sonia Gandhi.
Bihar is run by a three-party alliance: the largest member is Lalu Yadav’s RJD, followed by Nitish Kumar’s JD(U), and then the Congress. In drawing in Sonia Gandhi, the Chief Minister reportedly wanted to establish that he had given his best shot to keeping his partnership from insolvency. The meeting last night with Tejashwi Yadav was, sources said, put together by three top politicians: Sharad Yadav of the JD(U), and Ahmed Patel and Ghulam Nabi Azad of the Congress.

Nitish Kumar’s only comments so far on the corruption case against the Yadavs have been negative – he has dismissed as inadequate their claim that the raids are revenge by Prime Minister Narendra Modi for their campaign against his policies and asserted that he will not deviate from “zero-tolerance to corruption.”
His attitude has been seen as a dead giveaway of his interest in reviving his earlier alliance with the BJP, which he ended in 2013 over its decision to promote Mr Modi as its presumptive prime minister. In recent months, however, Nitish Kumar has backed PM Modi on several policies and he broke last month with an 18-party bloc of the opposition to support the BJP’s candidate for President of India.ndtv.