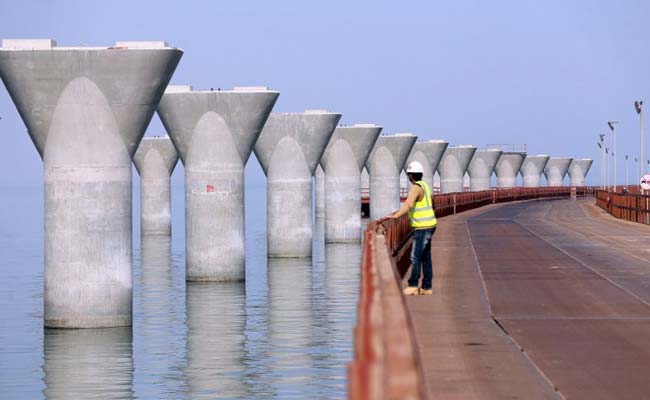 KUWAIT : Kuwait is building one of the world’s longest causeways to its remote north where it will pump billions into “Silk City”, aiming to revive the ancient Silk Road trade route.The oil-rich emirate is eager to inject life into the uninhabited Subbiya region on its northern tip that has been chosen as the location for Silk City.

The plan is to reinvigorate the ancient Silk Road trade route by establishing a major free trade zone linking the Gulf to central Asia and Europe. The 36-kilometre (22-mile) bridge, three-quarters of it over water, will cut the driving time between Kuwait City and Subbiya to 20-25 minutes from 90 minutes now.

Investment in the Silk City project is expected to top $100 billion, and a 5,000-megawatt power plant has already been built in Subbiya.At a cost of 904 million dinars ($3.0 billion), the Sheikh Jaber Al-Ahmad Al-Sabah Causeway, named after the emir who died in January 2006, is one of the largest infrastructure ventures in the region.It is already nearly three-quarters completed.

Despite the sharp drop in oil income which made up 95 percent of public revenues, the emirate has pledged to keep spending on capital projects almost intact. Kuwait boasts a $600-billion sovereign wealth fund, and is in the middle of a five-year development plan stipulating investments worth $115 billion.

“The causeway project is a strategic link connecting Kuwait City to the northern region,” said Ahmad al-Hassan, assistant undersecretary for road engineering at the public works ministry.
According to AFP that in addition to the fully integrated residential Silk City, other economic ventures are planned for Subbiya and its surroundings.

A large container port is also under construction on nearby Bubiyan, Kuwait’s largest island. The construction site of the Jaber Causeway in Kuwait City.
Completing the causeway and harbour projects will pave the way for transforming the area into a commercial and investment hub with a free trade zone planned on five small islands nearby.The causeway project consists of the main bridge north to Subbiya and a 12.4-kilometre (7.7-mile) bridge running west, dubbed the Doha Link.
The two bridges start from the same point at Shuwaikh Port, the country’s main commercial port.”If we take the Subbiya bridge alone, it is the fourth longest in the world,” Hassan said.

“We have already completed 73 percent of the project and hope to finish it ahead of the contractual period,” Messad told AFP.The Subbiya bridge sits on more than 1,500 piles with a diameter of up to three metres (10 feet) each, some of which have been driven as deep as 72 metres (240 feet) into the loose clay seabed, Messad said.

The bridge is between nine metres and 23 metres (30 feet and 75 feet) above sea level.The Silk City project itself has been proceeding at a slow pace, but the government recently sent a draft bill to parliament to establish a special authority to oversee development in the area.
Parliament is expected to start debating the bill soon.Under the original blueprint, the city’s completion date was 2030 and was to include a 1,001-metre (3,284-feet) tower and a population of 700,000.
In late 2015, the cabinet gave the green light to establish a free economic zone on the five islands near Subbiya and the coastlines of Iraq and Iran.It is hoped that once complete, the zone, spread over several thousand square kilometres (square miles), will become the economic gateway to the northern Gulf.

However, nothing tangible has yet been done to advance the free economic zone project itself.The Subbiya Causeway contract was awarded to a consortium led by South Korea’s Hyundai Engineering and Construction Co. along with Kuwait’s Combined Group Contracting Co.Another South Korean firm, GS Engineering & Construction, won the smaller Doha Link contract.
(Except for the headline, this story has not been edited by  staff and is published from a syndicated feed.)