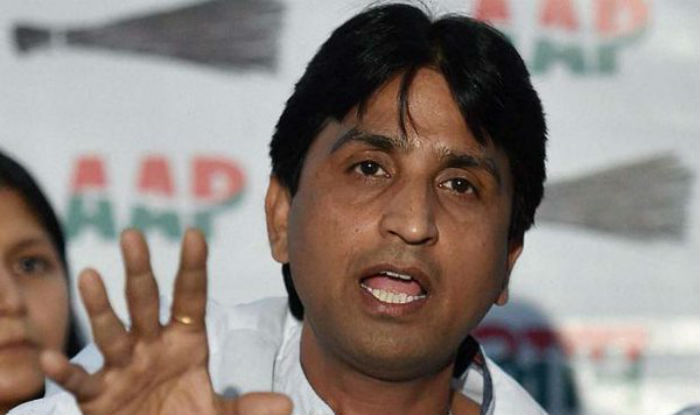 NEW DELHI : With Arvind Kejriwal as witness, a legislator from his Aam Aadmi Party or AAP placed a call on the night of April 30 to Kumar Vishwas, among the party’s main crowd-pullers. Mr Kejriwal, who is the Chief Minister of Delhi, listened in as Mr Vishwas, a popular Hindi poet, disclosed that he was ready to take over as party chief. With him, he said, was then minister Kapil Mishra and 33 other legislators – more than half the party’s law-makers.  Mr Vishwas said he would replace Mr Kejriwal as the top boss of AAP.
The 48-year-old Chief Minister now knew that the swirling rumours of a concerted effort by Mr Vishwas to leverage recent AAP debacles including its defeat in the Delhi local elections were far from baseless.
This version of events, as provided by AAP sources, has not been denied by the Chief Minister or his office so far. Sources said the party is likely to release a statement soon on the latest scandal that has emerged from its ranks.
Mr Kejriwal sacked Mr Mishra as a minister 7 days later. But he did not act against Mr Vishwas reportedly because they have a long-standing family connect and the Chief Minister, regularly critiqued for brooking no dissent, did not want to be imaged as sacking a popular leader. His orchestration of the exit of Prashant Bhushan and Yogendra Yadav in 2015 who were among the handful of founders of the party, is still a sore point for the party and the men targeted.
So though several top leaders of AAP urged him to remove Mr Vishwas, the Chief Minister negotiated a settlement, which included placing Mr Vishwas in charge of the party for Rajasthan. A senior bureaucrat in Mr Mishra’s office confirmed that together with Mr Vishwas, he had allied a meeting of the legislators who were willing to go along with the plan for a coup.
But after Mr Kejriwal moved strategically to quell the revolt, they quickly corrected their stand. Party sources say that they remain convinced that Mr Vishwas was incentivised to move against Mr Kejriwal by the BJP, which won the local elections in Delhi last month and has clashed regularly with the Chief Minister who spares no chance to attack Prime Minister Narendra Modi.
Mr Vishwas has in different occasions denied any interest in an explicit or covert alignment with the BJP. But just before the meeting designed to overthrow Mr Kejriwal was held, an AAP legislator named Amanatullah Khan went public with the allegation that Mr Vishwas was trying to split the party at the instance of the BJP.
Mr Vishwas presented this as an insidious attempt to discredit him and demanded the legislator be penalised. As part of the negotiated agreement with Mr Kejriwal, Mr Khan was suspended from party posts, but was quickly compensated for his loyalty to Mr Kejriwal  by being inducted to various committees of the Delhi Assembly.ndtv.