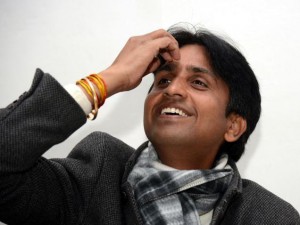 NEW DELHI : in a major embarrassment for the Aam Aadmi Party’s national convener Arvind Kejriwal, who is trying to woo voters in the poll-bound capital city, Kumar Vishwas on Tuesday openly praised Narendra Modi, saying that if “PM does well, I have the right to praise him.
” Speaking to an English news channel on Tuesday, senior AAP leader Kumar Vishwas said, “Narendra Modi is a comparatively better PM than Manmohan Singh.” Asked whether he finds Modi proactive, Vishwas said, “Yes definitely, the Modi government has come out of the policy paralysis of the previous government and doing a few things, but when it comes to delivering on promises like bringing back black money that has not happened…” Further criticising Arvind Kejriwal’s decision to quit as Chief Minister of Delhi, Vishwas added, “Not many discussions were held.
We should have spoken to people about the decision.” ​ Vishwas also admitted that AAP has behaved like a ‘typical political party’ at many instances in the past. Asked about incidents, which he did not like personally, he said, “What was the need to throw stones at the BJP headquarters if your leader was attacked there (Gujarat).
Whoever took that decision was wrong and whoever went there was wrong.” Talking about Modi’s recent visit to Japan, Vishwas said, “The day Modi went to Japan, I tweeted that this is a welcome move.” “He (Modi) has been made a PM, so we have to give him a chance,” added Vishwas. Praising PM Modi’s recent visit to Kashmir, Vishwas added, “People in J&K felt like the PM is ours.” Further defending his decision to perform at an event in Surat to commemorate Narendra Modi’s birthday, Vishwas said “It’s a poetry session” and he has been participating in that event for years and does not find it strange to participate at an event honouring his “political rival”.
The AAP leader also confirmed that that he will perform at the event. Narendra Modi’s birthday is on September 17. “I don’t understand political rivalry. Modi is the Prime Minister of the country. He is standing on one end of politics and we on another. Today, if he is PM, then he is my PM, even if I have not voted for him. If he governs well, I will praise him and if he doesn’t, I will criticise him,” he added. However, Vishwas ruled out the possibility of his joining the Bharatiya Janata Party. “I may come out of AAP but will definately not join BJP” Vishwas said.
The shocking statements made by Vishwas came at a time when AAP and BJP are in a big tussle to form government in Delhi. This has given fresh ammunitions to Congress. Reacting sharply over Vishwas’ comments, Congress said, “AAP leader Vishwas sending clear overtures to BJP that he is keen to join the party.” Earlier, on August 30, Vishwas had claimed that a BJP MP had offered that he would be made the Chief Minister of Delhi if he joined the party to help it form government. “On August 19, a BJP MP, who happens to be a good friend, visited me along with other party leaders. During talks he made an offer that I switch to BJP and in return I would be made the Chief Minister and that the higher-ups were aware of the move,” Vishwas had said.