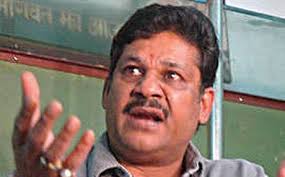 NEW DELHI: Expressing his view on the BCCI’s recent proposal to Pakistan to play a limited-over-series in India, former Indian cricketer and BJP MP Kirti Azad on Wednesday said the board always sees itself as being above the law. He questioned whether the BCCI had any concern for India’s security.
“On one hand we have Indians bleeding on the border and on the other hand BCCI wants to play with Pakistan. Should we go ahead with cricket diplomacy?,” Azad asked sarcastically.Azad has repeated the comments he made on November 14, opposing an India-Pakistan series in December.
“The Board of Control for Cricket in India (BCCI) should know first whether the government has given its approval or not. I have always been saying that the BCCI thinks of itself as being above Indian laws,” the 56-year-old had told ANI in Delhi.
Azad had also slammed Pakistan for their desperation to play bilateral series with India, saying that they are ready to play even in deserts.”Pakistan is ready to play anywhere even in deserts. I don’t think government has given any permission.
Whatever maybe the situation it is necessary to take permission from the government. Terror and talk cannot go hand in hand. Unless there is a stable situation, PCB and the BCCI should stop asking for series,” Azad added.
Meanwhile, Indian Premier League (IPL) chairman Rajeev Shukla revealed that they would talk to the government regarding the matter and try to get their permission.
“We will talk to the government and ask for their permission. We also need to know if the PCB wants to play or not. If they are not ready to play then there is no use of discussion. And if they are ready then we will to talk to BCCI president Shashank Manohar, who will discuss it further. Until we get an official response from the PCB, I cannot comment on it,” Shukla said.
The BCCI had proposed Pakistan to play a limited-over series against them in India in December, which may include five ODIs and two T20s.
Speaking on the matter, BCCI president Shashank Manohar had said that as it seems to be difficult to play series in UAE in December, so they are looking forward to play limited-over series in India.India have not played a full bilateral Test series with Pakistan after the 2008 Mumbai terror attacks.
The last time the two nations played was in 2012-13 when Pakistan visited India for a three-match One Day International (ODI) and two-match Twenty20 series.
According to a memorandum of understanding (MoU) signed between the PCB and BCCI, both countries are scheduled to play six series between 2015 and 2023 after a clearance from the Indian Government.