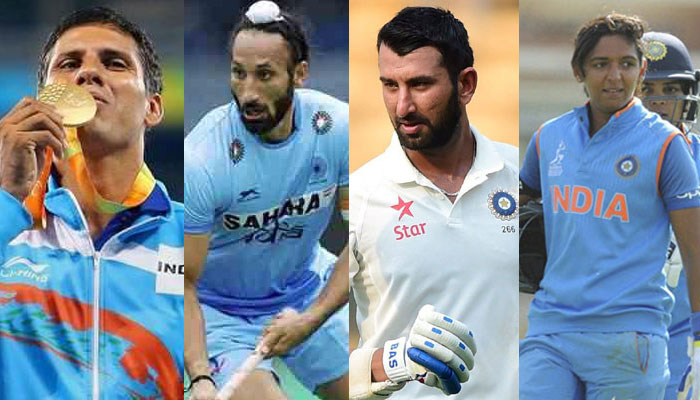 NEW DELHI : Cricketers Harmanpreet Kaur, Cheteshwar Pujara; Para-athletes Mariyappan and Varun Singh Bati are among 17 sportspersons who will be honoured with the Arjuna awards today. While Sardar Singh and Devendra Jhajharia will be conferred with the Rajiv Gandhi Khel Ratna awards.

The players will receive the honors from President Ram Nath Kovind at a specially organized function at the Rashtrapati Bhawan.
Devendra Jhajharia (Para Athlete): The 36-year-old Jhajharia’s two gold medals came in the 2004 Athens Games and last year’s Rio Paralympics and he set new world records on both the occasions. He also won a gold medal at the 2013 World Championships.
Sardar Singh (Hockey): The 31-year-old, regarded as one of the ace midfielders in the world, became the youngest player to captain the Indian hockey team when he led the side at the 2008 Sultan Azlan Shah Cup.
Here’s the complete list of athletes to be conferred with the Arjuna award:
Archery
Jyothi Surekha Vennam: The Andhra Pradesh archer was extremely successful at the 2013 World Youth Championship, winngin the individual gold and team silver in the compound event. She also won an individual gold in the 2015 Asian Championship.
Athletics
Khushbir Kaur: The Punjab athlete rose to stardom in 2012, when she won a bronze in 10km race walk event at Asian junior championships. At senior level, the best she has achieved so far is a silver at the 2014 Asian Games in Incheon.
Rajiv Arokia: The sprinter, who participates in the 400m race, has been a consistent part of the 4x400m relay national team. He won a bronze in the 2014 Asian Games and went a step further to finish second in the recently concluded Asian championships in Bhubaneswar.
Basketball
Prashanthi Singh: She has been a consistent performer in the women’s national team and hence has been consistently been picked since her debut in 2002. The Uttar Pradesh-born represented India at the 2006 Melbourne Commonwealth Games, and also at the the 2010 and 2014 Asian Games.
Boxing
Laishram Devendro Singh: The Manipur-born lost out in the quarter finals of 2012 Summer Olympics but went on to win a silver at the Asian Confederation Boxing Championship and 2014 Commonwealth Games.
Cricketers
Cheteshwar Pujara: He was the cornerstone of India’s 13-Test home season, facing teams like England, Australia, Bangladesh and New Zealand. The Test-specialist scored 1316 runs – the highest-ever aggregate for an Indian batsman in a single Test season.
Harmanpreet Kaur: The Monga girl became a household name with her memorable 171 not out in the World Cup semifinals against Australia that took India to the finals. She was one of the most consistent performers for the team in England.
Football
Oinam Bembem Devi: She has been the flagbearer of Indian women’s football for over the past two decades was named in the prestigious list of sportspersons to be giving the Arjuna Award. Bembem is now the second Indian woman footballer to win the award, the first being Shanti Mullick in 1983.
Golf
SSP Chawrasia: A seasoned Indian golfer, he a winner of six international titles including four on the European Tour. Chawrasia is now set to become the 19th Indian golfer and the 10th Professional Golf Tour of India (PGTI) member to be conferred the Arjuna Award.
Hockey
SV Sunil: He was recently named ‘Player of the Year’ in Asian Hockey Awards. Sunil has been pivotal in Hockey India’s successful outing at the FIH Champions Trophy in London last year where he led the forwardline.
Kabaddi
Jasvir Singh: The Haryana-born raider, who curently plays for the Jaipur franchise in the fifth season of Pro Kabaddi League, was an important member of the national team that won gold in the 2014 Incheon Asian Games as well as the the 2016 World Cup.
Shooting
Prakash Nanjappa: The pistol shooter who hails from Karnataka, won a bronze in 10m air pistol at the 2013 World Cup. Later, he went on to bag a silver at the 2014 Commonwealth Games and a team bronze at the Incheon Asian Games. He also was a part of the Indian contingent at the 2016 Rio Olympics.
Table Tennis
Anthony Amalraj: The Tamil Nadu player won silver medal at 2014 Commonwealth Games in doubles with Sharath Kamal.
Tennis
The 29-year-old made the country proud by winning the gold medal in mixed doubles along with Sania Mirza and won silver medals in men’s double along with Sanam Singh, all at the 17th Asian Games in 2014.
Wrestling
Satyawart Kadian: He represented India at the inaugural 2010 Youth Olympics where he won a bronze medal in the boys’ freestyle 100 kg category.
Para-Athlete
Mariyappan: He won the gold medal in the men’s high jump (T-42 category) at the Rio Paralympics in 2016. Varun Singh Bhati:After bagging a bronze medal at the Rio Paralympics he was a star performer at the 2017 World Para-Athletics Championships in London as well, finishing third again. He also won gold at the 2014 China Open Athletics Championship and finished fifth at the 2015 World Para-Athletics Championships.
Here’s the complete list of coaches to be conferred with the Dronacharya Awards: Late Dr. R. Gandhi (Athletics) Heera Nand Kataria (Kabaddi) G.S.S.V. Prasad (Badminton – Lifetime) Brij Bhushan Mohanty (Boxing – Lifetime) Mr. P.A. Raphel (Hockey – Lifetime)Sanjoy Chakraverthy (Shooting – Lifetime)
Mr. Roshan Lal (Wrestling – Lifetime) Here’s the complete list of sportspersons to be conferred with the Dhyanchand Awards: Bhupender Singh (Athletics) Syed Shahid Hakim (Football) Sumarai Tete (Hockey)zeenews.