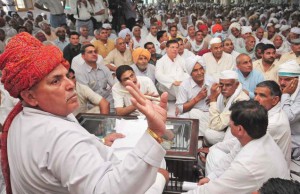 JIND (HARYANA) : JIND (HARYANA) : Giving an unusual opinion which is very different from the ideologies of Khap panchayats so far, chief of such an informal social institution in Haryana has given his approval to use mobile phones and wearing jeans for girls, saying that this is a fundamental right of a girl and no panchayat should put a ban on it.
According to reports, Kandela Khap Panchayat chief Tekaram Kandela on Monday said that to ‘use mobile phones’ and ‘wear jeans’ is the fundamental right of a girl and his panchayat does not encourage a ban on it.He, however, asserted that a girl should dress according to the society she is present in and also said that Panchayats should not take decisions which “kill” the rights of the people.
Khandela’s comments come in wake of panchayat of Gujjar community banning unmarried girls from wearing jeans and keeping mobile phones, claiming that its was having a “bad” effect on them and led to eve-teasing incidents.The panchayat in Jadwad village on August 8 passed the diktat banning wearing of jeans and use of mobile phones by unmarried girls and also claimed that eve-teasing incidents had increased due to “objectionable” clothes worn by girls.Condemning such dictats, Khandela said “We should not kill anybody’s rights.
Every individual is free to wear anything they like, but, at the same time, the dress should be in accordance to the society they live in.”He further said, “a girl should dress up keeping in mind the repute and dignity of the society she lives in. Such bans do not reduce crimes rates. Crimes will stop when people will impose self restraint and adhere to social policies.”
Khandela urged Khap Panchayats to formulate several committies to create awareness among people to prevent rapes and violence against women in the society.He said khap panchayats in Harayana will play a major role in the upcoming Assembly elections in the state.Khap panchayats have had a long innings in the Jat-dominated areas of north-western India and some of their decisions that go against individual rights have even led to many heated controversy.