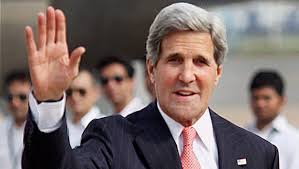 NEW DELHI : US Secretary of State John Kerry this morning toured the prestigious Indian Institute of Technology Delhi on a trip where he is stressing the theme of science and innovation to find solutions on climate change and other global challenges. He will also press New Delhi to drop its opposition to global trade reforms, describing it as a test of the country’s commitment to economic liberalization.
As India has threatened to block a worldwide reform of customs rules, saying it must be accompanied by a parallel agreement allowing developing countries more freedom to subsidise and stockpile food grains. The deadline for the deal that the World Trade Organisation (WTO) says could provide a trillion dollar stimulus to the global economy is Thursday.
In an article published in a newspaper hours before he arrived in Delhi, Mr Kerry wrote, “India must decide where it fits in the global trading system. Its commitment to a rules-based trading order and its willingness to fulfil its obligations will be a key indication.
” Mr Kerry arrived in New Delhi on Wednesday evening for an annual strategic dialogue, the first engagement with the government of Prime Minister Narendra Modi that took power in May promising to put India back on a high growth path. Critics say that so far, the new administration has moved slowly on reforms, and its hardening stance at the WTO suggests a more nationalist response on key issues than the previous government headed by Dr Manmohan Singh. India and the United States have already clashed at the WTO, with Washington saying Delhi’s 11th hour resistance could kill a deal that could create 21 million jobs.
Mr Kerry said India stood to gain by creating a level-playing field instead of erecting trade barriers. While diplomats in Geneva said they were pessimistic that Mr Kerry’s trip could provide a breakthrough, US Trade Representative Michael Froman urged holdouts to come back to the table.
Disputes over protectionism and intellectual property rights have soured the business climate and India has remained cautious about committing to US strategic designs in the region. The relationship took a dive last year after Indian diplomat Devyani Khobragade was arrested in New York on charges of mistreating her domestic help, an episode that provoked outrage and resentment in New Delhi. The PM is scheduled to meet President Barack Obama in Washington in September.