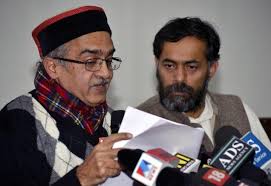 NEW DELHI: Hours after Delhi Chief Minister Arvind Kejriwal returned here on Monday night after 12 days of naturopathy treatment in Bengaluru, the warring factions of the Aam Aadmi Party met to resolve differences.
Notably, AAP has been torn into two factions, one of Kejriwal’s loyalists and the other led by Prashant Bhushan and Yogendra Yadav, both senior leaders.Kejriwal, who resumed work today, has reportedly expressed unhappiness over statements in the media on party rifts.
Senior AAP leaders Sanjay Singh, Kumar Vishwas, Ashutosh and Ashish Khetan, who have been deputed by Kejriwal to hold talks with Yogendra Yadav and Prashant Bhushan, met Yadav at his residence late last night and held discussions over several contentious issues.
Both the camps have termed the discussions, which continued unitl 3 am, as “positive”.After last night’s meeting, Sanjay Singh told reporters that the talks, which went on for two-and-a-half hours, revolved around the recent happenings in the party. Describing the meeting with Yadav as positive, Singh said that more rounds of talks will take place.
Later, Yadav told reporters: “A dialogue was initiated today. It was good. Talks have just started.”“It is not a matter of ego. They are friends. Discussions were held earlier too and will continue to take place in the future as well.” When the consensus is reached, it will be revealed, he added.
The discussions took place at a time when Yadav and Prashant Bhushan had sought time from Kejriwal for a meeting to put an end to the ongoing controversy. A message was sent to Kejriwal last morning on behalf of both the leaders.
Though there was no response from Kejriwal to the SMS till late last night, the AAP leaders then met Yadav.”We were bothered with what was happening in the party for the past few days. We started talks with Yogendra (Yadav) bhai. The start was good,” Sanjay Singh tweeted.
Sources close to Yadav too echoed similar sentiments.”There is peace after a three-hour sleep. There is peace now. We will be successful,” party leader Kumar Vishwas tweeted this morning.
Over the past few weeks, AAP had been embroiled in internal turmoil with leaders from both the camps making accusations and levelling allegations against each other.
The Kejriwal camp had alleged that Bhushan and Yadav wanted the party to lose the Delhi Assembly Elections and were attempting to remove the Delhi Chief Minister from the post of AAP National Convener.
In the course of the vicious in-fighting, Bhushan and Yadav were dropped from the party’s elite political affairs committee (PAC), allegedly at the behest of the Kerjiwal faction within the party.Later, a letter war and sting operations involving Kejriwal embarrassed the party.
Kejriwal flew back to Delhi last night after 12 days of naturopathy treatment in Bengaluru for chronic cough and diabetes.