NEW DELHI : One of the founder members of the Aam Aadmi Party Shazia Ilmi, is understood to be considering resigning from the party. Ilmi, one of the most prominent faces of the party, is reportedly not happy with the AAP’s policies. ” AAP needs to reinvent itself. It needs to change its strategy. The party has made several mistakes,” she told the media. 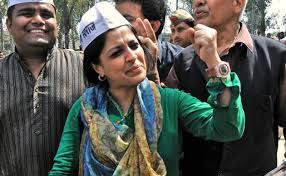 Reacting to Shazia’s decision, former AAP member Ashwini Upadhaya said soon no one will be left in AAP except for Kejriwal, Sisodia, Yogendra Yadav, Sanjay Singh and their sycophants.Sources in the party said Ilmi was upset with the AAP’s decision to not nominate her from Delhi in the general elections. Ilmi had conveyed her displeasure to the top brass, but her complaints were not addressed.
Ilmi said she will hold a press conference on Saturday to announce her decision. AAP leader Ashutosh, meanwhile, dubbed the news as ‘ baseless’. Ilmi was also said to be upset with AAP chief Arvind Kejriwal for not campaigning on her behalf in Ghaziabad in a big way, they said. Ilmi faced a crushing defeat at the hands of former Army chief V. K. Singh in Ghaziabad.
The AAP leader had managed a lowly fifth place with just 89,147 votes. The voices of dissent are growing in the AAP, with even volunteers demanding resignation of the top brass. At a meeting on Friday, a group of volunteers raised posters asking for resignation of some leaders.