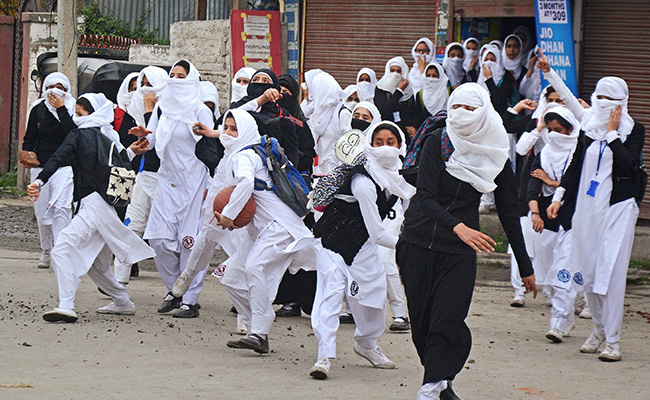 SRINAGAR: The girls are back to school. But during the past week, a gender barrier was broken in Kashmir valley. No one it celebrating it though. For the first time, scores of schoolgirls in their school uniforms came on Srinagar streets to protest. When the police tried to disperse them, some of them picked up a stone too.
It was a defining image of the turmoil in the state; a rare and disturbing sight.The trigger, the students say, was the crackdown earlier this month on students by security forces in a college in Pulwama, some 30 km away. Video clips that showed students being beaten went viral on social media, after which security forces drew criticism. Over 50 students were injured after they protested against a temporary check-post set up outside the college by the security forces.
The school girls say stone pelting that they participated in was a response to this police action.But the anger, Class 12 student Barjees suggests, is deep-rooted and dates back to the time when she wasn’t even born.  But she has heard many stories, one of them about the Kunan Poshpora rapes in 1991.

“I remember every incident… Yes, we are meant to be in front of blackboard with teachers, not armed men… No one is safe,” says an agitated Barjees. The casualties in last summer’s streets protests, the valley’s bloodiest in years, didn’t help either. Videos of students being beaten inside a college was the last straw.
“It’s not about particular gender, whether it is a girl or boy who is targeted. It is about the educational institutions and students who have been targeted here” said Babra, a schoolgirl. Her sister Baasira, a student of Girls Higher secondary School Kothibagh in Srinagar says school students cannot remain immune to what is happening outside. “We are the base of this society, of Kashmir… We don’t want this conflict should carry on. Our protest is in solidarity with people” said Baasira, also a class 12 student.

The ruling PDP and BJP alliance concedes it is a worrying development. “Students leaving their studies and joining protests and stone pelting… we feel is a very serious matter,” said Arun Gupta, BJP spokesman. Nizamudin Bhat, general secretary of the ruling PDP that is in alliance with the BJP, appealed for calm. “I will appeal to society and parents that this will impact our social fabric. we are ripping apart and disintegrating  if educational turn into violent places,” he said.ndtv.