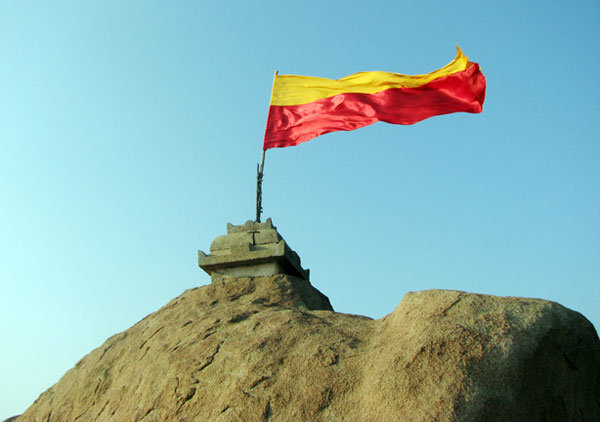 BENGALURU : The Congress government in Karnataka has set up a nine member committee to design a state flag (an identity symbol unique to the state), according to a report . The 9-member committee will submit its report on giving the state flag identity a legal sanctity.

Noteworthy, if this move by the Congress leader Siddaramaiah led state government sees the light of the day, then Karnataka will only be the 2nd state in India to officially have a flag of its own. As of now, Jammu & Kashmir has its own flag because it enjoys a special status under Article 370 of the Constitution.The move is in sync with the pro-Kannada voices of the state.

Interestingly, the big move by Congress government has come months ahead of Assembly Elections in 2018. Also, it is far different from BJP’s stand which Karnataka took in 2012 when the saffron party was in power in the southern state. According to TOI report, then BJP government had clarified that a separate flag would go against the unity and integrity of the country.

The Karnataka government has set up a committee to extamine whether it can legally have a separate flag. The panel has also been asked to look into possible designs for the same. If the move by the Congress-led state government comes into being, Karnataka will be the second state in the country to have a flag of its own, after Jammu and Kashmir – the state that enjoys special status under Article 370 of the Constitution.
The move comes months ahead of the assembly elections and marks a departure from Karnataka’s 2012 stand when the BJP was in office. Rejecting the suggestion to declare the red-and-yellow Kannada flag the official state flag, the BJP government had then told the high court that a separate flag would go against the “unity and integrity of the country”.