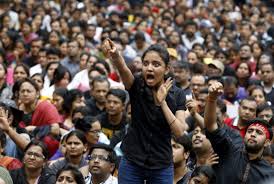 BANGALORE: While hundreds of parents protest in panic on the streets of Bangalore after a six-year-old child was allegedly raped at an elite school this month, Karnataka Chief Minister Siddaramaiah today snapped at a reporter saying, “Is this the only news? Is there no other news?”
The chief minister had been asked for comment on the case, which has terrified not just Bangalore, but the entire country. “Whatever action is required we will take that…Wherever we can invoke the goonda act we will do that,” the chief minister added, also accusing the opposition BJP of making political capital from the case.
A roller skating instructor has been arrested for the alleged rape of the child, a first grade student of Vibgyor High School, on July 2. On his laptop and mobile, the police found videos of children being raped.
In 2011, he was sacked by another school for touching girls inappropriately despite numerous warnings. His previous employers, Deen’s Academy, today wrote to parents as it faced criticism for not reporting Mustafa to the police.
The school said in its letter that Mustafa was fired in December, 2011, for “gross misconduct” but there was “no culpable incident whatsoever” that required them to report him to the police.
The six-year-old student was allegedly assaulted in a classroom at the school, a top fee-paying institution favoured by local politicians and businessmen.
Her parents found out seven days later and went to the police. In their protests parents from across the city have demanded tough action against the school for not protecting the child.In the state Assembly on Monday, Mr Siddaramaiah had announced action against the school’s management and said that it had tried to hush up the case and failed to provide CCTV footage of the campus.