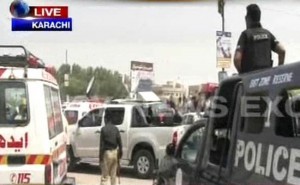 KARANCHI: At least 47 people were killed in Pakistan’s Karachi on Wednesday when armed men entered a packed bus and opened fire.Reports suggest 25 men and 16 women have been killed. There were around 60 passengers, including children, on the bus.
Witnesses say six men came on three motorbikes, entered the bus and fired indiscriminately for nearly 10 minutes. Most passengers were reportedly shot in the head at close range.
The bus driver is believed to have been shot first. TV footage showed a pink bus covered in bullet holes.”There were six terrorists on three bikes. They got off the bikes, climbed the bus and opened fire using 9 mm pistols,” a senior police officer told reporters.
The bus reportedly belongs to the Al-Azhar Garden Colony, which is an Ismaili community housing project in Karachi.No one immediately claimed responsibility for the attack.Taliban splinter groups have bombed several mosques belonging to religious minorities this year.