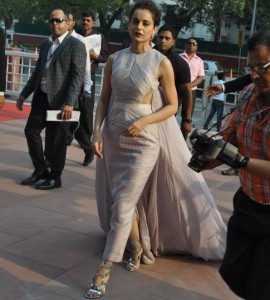 NEW DELHI : Bollywood actress Kangana Ranaut today made a bold fashion statement at the 62nd National Awards, by opting for a light mauve body-hugging gown. The 28-year-old actress, who bagged her career’s second National Award for her poignant portrayal of a young girl left at the altar by her fiance in Queen, did not follow the usual trend of donning a traditional outfit to the ceremony
Kangana’s attire was designed by New York-based Indian designer Bibhu Mohapatra, whose collection was earlier worn by US first lady Michelle Obama at her India visit earlier this year.
The dress had a long cape and slit at the back. The actress completed the look with her hair tied up in a bun and a dark maroon lipstick.While Kangana took home the best actress National Award, South Indian star Vijay won the best actor trophy for his role in Kannada film Nanu Avanalla Avalu.
Other Bollywood actresses including Vidya Balan and Priyanka Chopra, who bagged the National Award for The Dirty Picture and Fashion respectively, wore a saree at the prestigious event.
Interestingly, Kangana, who won her first National Award for Fashion in the best supporting actress category, also went for an Indian dress, a black salwar kameez. The actress will be next seen in Tanu Weds Manu Returns.