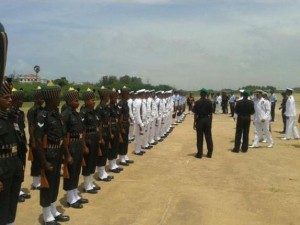 MADURAI:The mortal remains of former President A.P.J. Abdul Kalam were on Wednesday flown to his hometown Rameswaram from New Delhi in a special an IAF Plane.
The aircraft reached the Madurai airport at around 12.45 p.m. The remains will be transported through an IAF Chopper to Mandapam where it will be received by Union Defence Minister Manohar Parrikar at the helipad.
District Collector L. Subramanian, Minister for Cooperation Sellur K. Raju, Mayor V.V. Rajan Chellappa and Corporation Commissioner C. Kathiravan were among those present at the airport and paid their respects.
Union Urban Development Minister Venkaiah Naidu, Mr. Parrikar and senior BJP leader Shahnawaz Hussain were present at the airport, when the plane took off from New Delhi.
Wrapped in the tri-colour, Kalam’s body was taken to the airport in a gun carriage from his 10 Rajaji Marg residence at 7 a.m., as officials and commoners bid farewell to the man, whose life inspired countless Indians.
Mr. Naidu and Mr. Parrikar are accompanying the mortal remains of Kalam to Rameswaram. Minister of State for Shipping Pon Radhakrishnan, who is from Tamil Nadu, will also join the two Union ministers.People gather in large numbers at Kalam’s Rameswaram house
A large number of people have gathered at former president A.P.J.Abdul Kalam’s house at Rameswaram to pay their last respects, a relative said on Wednesday.
“People in large numbers have assembled at Kalam’s house to pay their last respects,” A.P.J.M.K. Sheik Saleem, the former president’s brother’s grandson told IANS over the phone.“All our relatives have also come to attend the last rites,” he added.
Prime Minister Narendra Modi will be attending the last rites of Kalam in Rameswaram on Thursday.The Prime Minister will arrive early in the morning and attend the rituals at around 11 am, sources said.Speaking to reporters Union Minister M. Venkaiah Naidu said some chief ministers are also expected to attend the last rites.

Tri-services personnel are present at helipad in Mandapam, where the mortal remains of Kalam will be received. Defence Minister Manohar Parrikar will be receiving the body at the Mandapam Helipad.
Kalam’s body will be kept at an open ground near Rameswaram bus stand for public viewing. Public can pay homage till 8 p.m. on Wednesday.
Tamil Nadu Chief Minister Jayalalithaa on Wednesday said she won’t attend the funeral of former president A.P.J. Abdul Kalam in Rameswaram on Thursday owing to “health condition”.
“I have great affection and respect for Abdul Kalam. I would like to attend his funeral and pay my respects to him. However, owing to my health condition I am not in a position to travel,” she said

As a mark of respect for Kalam, Thursday would be a public holiday in Tamil Nadu. State Chief Minister Jayalalithaa said following a request from Kalam’s family, government land had been allotted for burying the mortal remains of the former president.
Finance Minister O. Panneerselvam, Electricity Minister Natham R. Viswanathan, Housing Minister R. Vaithilingam and several other ministers will attend the funeral on behalf of the Tamil Nadu government.
The district administration of Rameswaram has selected three places for the funeral and would finalise a place after consulting A. P. J. M. Maraikayar, elder brother of Mr. Kalam and other family members, official sources said.
Three places – a government land at Meyyampuli, near Thangachimadam; a forest land at Natarajapuram near Danushkodi; and a private land of Abil Kabil Dargah have been shortlisted, the sources said.
Kalam’s Twitter account renamed ‘In memory of Dr Kalam’Although former President A.P.J. Abdul Kalam is no more, his Twitter account will continue to be active in a new form.
A team of his close associates has decided to run his official Twitter account, which has now been renamed as ‘In memory of Dr Kalam’. Kalam’s close aide Srijan Pal Singh will act as the administrator of this Twitter account.

T. Sampath Kumar, a room-mate of Kalam, when he was doing his undergraduation from St. Joseph’s College, Tiruchi, recalls he six-decade friendship with the former President. Read more

Protocol and procedure are sacrosanct in the Rashtrapati Bhavan, but Dr. Kalam was the unassuming boss, who never made demands. Satish Kumar, who served as Kalam’s butler for five years in Rashtrapati Bhavan, share stories of his generosity and modesty.

When Kalam was the President, only once did his family visit Delhi. They travelled in a sleeper class coach from Madurai and a government bus picked them up at the railway station. Senior scientist V. Ponraj remembers the humane face of Kalam that was never publicised.