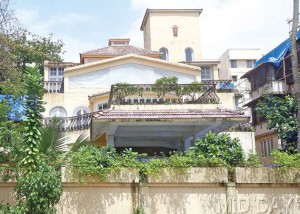 MUMBAI: The home where Hindi cinema’s first superstar lived has been sold, but for a price that doesn’t quite match up to the glamour of its swank locale or its elite owner. Vardan Aashirwad, the iconic Carter Road bungalow where Rajesh Khanna spent his last days two years ago, has been sold for somewhere between Rs 90-95 crore, sources claim.
They say the sum is lighter than one would have expected because of the relatively small plot size of the property, and, more uncannily, the recent reports that the house is haunted.Real estate sources from Bandra said the deal was shrouded in secrecy, with both parties tightlipped about it. The buyer has been identified as a businessman named Shashi Shetty.
“What we have heard is that the property has gone for a mere Rs 95 crore because of its reputation as haunted, and also because the area of the plot is too small to construct a high-rise. We have heard that Shetty has bought it. We are trying to get further details. People associated with the deal are very secretive,” our source revealed. The property admeasures 603 square metres, and is the first plot at the upscale Carter Road, now known as Sangeet Samrat Naushad Ali Road. Music director Naushad was one of the locality’s inhabitants.
The bungalow was earlier known simply as Aashirwad, and before that as Dimple a name its previous owner, actor Rajendra Kumar, had given it. Khanna apparently wanted to retain the name, but this was not agreeable to Kumar, who had constructed another bungalow in Pali Hill and given it the same name. The bungalow, which Khanna bought for R3.5 lakh, was renamed Vardan Aashirwad.
After Khanna’s death on July 18, 2012, the property was automatically transferred to his daughters Twinkle and Rinke Khanna. However, Rajesh Khanna’s live-in partner, Anita Advani, has been claiming her share in the property for some time now. A public notice was issued in this regard, which shows both Twinkle and Rinke as owners, and lawyers for the new owner have called for any objections regarding the title of the plot.
Advani said, “The property is still under litigation and I will be challenging the public notice that has been published in the newspaper today. I have asked for a stake in the property and the case is pending in court. A broker clued in about the deal said, “The deal took place 15 days ago. Last Friday was Khanna’s second death anniversary and the plot was sold just before that. It’s too small to be developed into a high-rise and, hence, whoever has bought it must have taken it for end use and not to redevelop the property.”
When we sent a detailed query mentioning the purported amount to Twinkle Khanna, her actor-husband Akshay Kumar and their manager Zenobia, the latter refused to revert to the query. Akshay and Twinkle also didn’t respond to our messages.There were talks that the daughters wanted to make a museum in their mega-star-father’s memory, but it seems the plan has been scrapped.