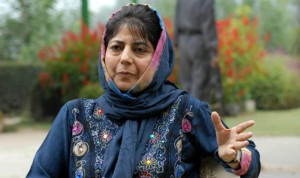 SRINAGAR: In Jammu & Kashmir, PDP President Mehbooba Mufti will stake claim for government formation before State Governor at Jammu today afternoon.
PDP ally BJP will simultaneously offer letter of support that will pave way for the next coalition government after over two months’ stalemate following demise of former chief minister Mufti Mohammad Sayeed on the 7th ofJanuary.
47 year old Mehbooba Mufti will be the first-ever woman chief minister of the State.BJP Legislative Party leader and nominated candidate from BJP, Dr Nirmal Singh will be Deputy Chief Minister in the new dispensation.
Dr Singh served in the same capacity in earlier coalition headed by Late Mufti Sayeed.Both Mehbooba Mufti and BJP President Sat Pal Sharma would jointly call on Governor NN Vohra at around 3:30 pm today. They will be accompanied by senior leaders of their parties.

PDP has presently 27 members in the 87-member J&K Assembly, while BJP has 25.PDP claims support of one Independent MLA from Kargil in Ladakh region, and BJP has support of three more MLAs including two of Sajjad Lone’s Peoples Conference.
BJP national leadership reiterated that no fresh conditions by PDP had been accepted and the alliance with the PDP will continue on the basis of the agenda of alliance agreed upon earlier by the two parties.