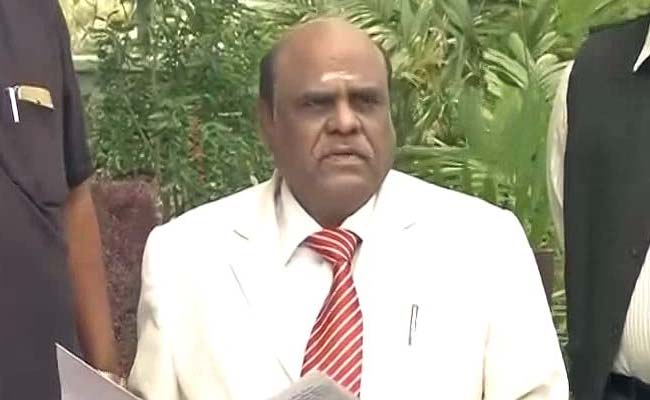 NEW DELHI : Justice CS Karnan will be medically examined by government doctors, the Supreme Court said today in its unprecedented legal battle revolving around the controversial Calcutta High Court judge who has challenged the country’s senior most judges after being accused of contempt. The top court also directed courts and tribunals across the country to ignore any orders passed by Justice Karnan, who did not show up for the hearing.
The medical examination will take place at the government hospital in Kolkata on Thursday, the court said, and the report has to be submitted in a week. The West Bengal police chief has been asked to make sure that the medical assessment takes place.
Right on cue, Justice Karnan rejected the order, and – in the bizarre ritual that he has followed in the past few months – flung it right back at the seven Supreme Court judges.
“This kind of harassment order against my sanity is an additional insult to an innocent Dalit Judge who is of sound health and mind,” he said, “directing” the Delhi police to “take all the seven judges and produce them to a psychiatric medical board attached to the AIIMS Hospital for appropriate medical tests”. He asked for a copy of the report on or before May 7, in his “signed order”.

Last week, Justice Karnan declared that the chief justice and other judges will not be allowed to travel outside the country. The “order”, he said, would not be cancelled until the cases against him were scrapped.Justice Karnan faces contempt after he named 20 “corrupt judges” of the country earlier this year and sought an investigation alleging corruption in the judiciary.
When he appeared in the Supreme Court in March, Justice Karnan refused to respond to the contempt notice and later went on to “summon” all the judges in a “hearing” that he held at his Kolkata home.Since then, the 61-year-old judge has matched every Supreme Court order on him with his own, announced in his “residential” court hearings.
Last month, Justice Karnan ‘ordered’ the Chief Justice of India and six judges to appear before him to face proceedings for “wantonly and deliberately” insulting him.At a hearing on March 31, Chief Justice JS Khehar had raised questions about the judge’s mental health.